A few years after acquiring the George and Dragon in 1856, it would appear that the new owners, the enterprising McKenna brothers, also acquired the adjacent late 18th century property at No 29 Swan Street and would soon embark on the next expansion of the George & Dragon, constructing what is now called The Picturehouse building that has been part of Band on the Wall since 2009. However, there are a few questions about the origins and early usage of this building. 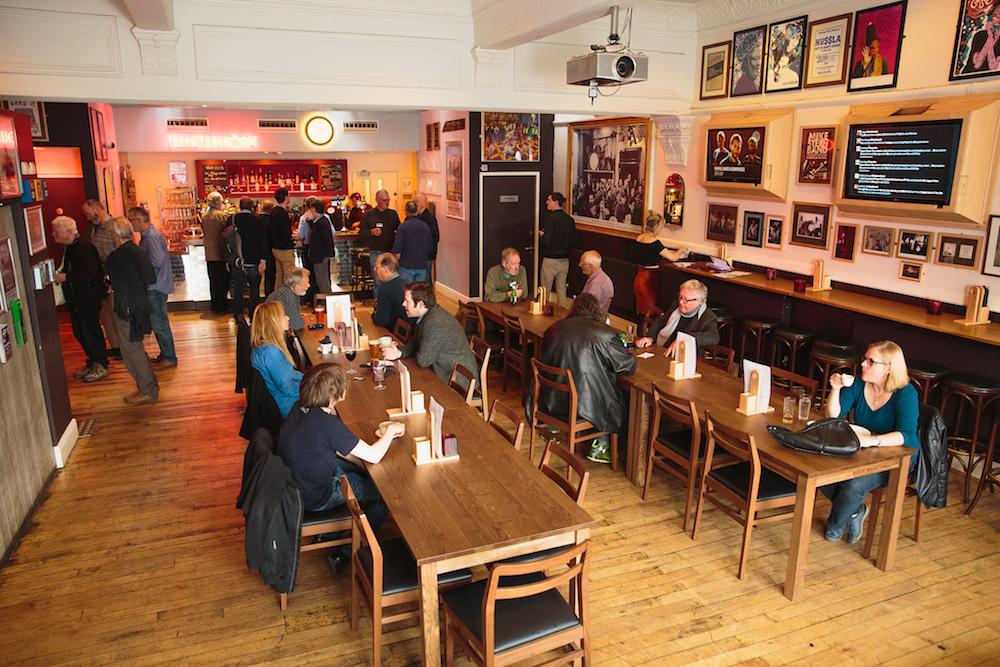 The English Heritage citation for the Grade 2 listed building says that it was built in approximately 1865.

The 2001 English Heritage report describes the building as ‘a remarkable three-storey building in the High Victorian Gothic style of the 1860s’ and suggests that originally it may have contained domestic accommodation in the upper floors.19Yet from 1863 there appears to be no evidence from available documents of live-in residents at this address that had numerous occupants in previous decades. Also, following an entry in the trade directory as ‘McKenna’s Vaults’ in 186320 there appears to be no further reference in the directories to these new owners or to the George & Dragon at this address until, probably, 1886.21Indeed in the 20 years from 1863, it would appear that the exclusive, continuous occupants were tobacco manufacturers Brooke & Waterworth. The company also traded from Park Villas, 742 Rochdale Road, Harpurhey. .

A likely interpretation of the facts of its early origin is that it was built by the McKennas – their monogram is on the façade of the building — and let to the tobacco company on a 20-year lease and, from the expiry of the lease in 1883, and into the early 20th century, it was run by the McKennas as part of the George & Dragon and as a centre for distribution of their wines and spirits, with their offices in the upper floors. Alternatively, it is possible that the building was constructed by the tobacco company and taken over and re-branded by the McKennas in the 1880s. Yet another possibility is that it was built by the McKennas but considerably later than the 1860s, after the tobacco company vacated the premises in 1883. All three options fit the date of the first recorded drinks licence for this building granted to Bernard McKenna in 1884.22 It is hoped that future research will resolve this question. What is not in doubt is that by the 1880s the building had been constructed, was owned by the McKennas and later in the century would be the registered address of their limited company.

In place of the previous occupant’s stores of tobacco, the McKennas’ products – wines and spirits from the bottling plant attached to their brewery in Harpurhey – no doubt were stored in the basement and loaded to horse-drawn carts in Goadsby Street at the back via the access passageway through the building. The passage exists to this day in an adapted form as a fire escape and internal access route for performers from the basement dressings rooms to the stage of Band on the Wall. In the McKenna era, a similar access on the ground floor also enabled customers and thirsty workers from the Smithfield Market at the back to directly enter the George & Dragon from Goadsby Street. This could have been sizeable traffic: In 1909, for example, over 370 traders were listed at the Market, mainly fruit, vegetable and potato salesmen; many more assistants were employed; and hundreds of customers visited daily.

Towards the end of the 19th century the McKennas turned the ground floor of this building into a restaurant and, as was fashionable at the time, by 1911, under new ownership, it was a billiard room prior to its conversion around 1915 to a picture house — of which more in the 20th century section of this history.

Now part of Band on the Wall, this remarkable building has the Picturehouse Café Bar on the ground floor, musicians dressing rooms, shower room, storage and public toilets in the basement, and, on the two upper floors, the offices of music organisation Brighter Sound that runs music education and participation projects both within Band on the Wall and elsewhere in the region.