It’s fair to say that Moon Hooch are crushing it in 2019. The Brooklyn-based trio have released a succession of stellar tracks, including one in collaboration with Tonio Sagan, grandson of the late Carl Sagan (who chaired the NASA committee behind the Voyager golden record,) and another reworking Ariana Grande’s God is a Woman into a whirling woodwind and percussion-led behemoth. They’ve also been committing their time and harnessing their platform to bring about positive change, getting involved in vital tree planting and permaculture projects with a view to counteracting climate change and unsustainable agricultural practices. With a new album an UK tour fast approaching, we had the pleasure of catching up with saxophonist Mike Wilbur to discuss their recent collaboration and community work, as well as discussing their relationship with fellow New Yorkers Too Many Zooz. Moon Hooch return to Band on the Wall on Tuesday 23rd July and you can pick up tickets for the show here.

You recently performed at the beautiful Red Rocks Amphitheatre. Where does it rank amongst the venues and locations music has thus far taken you?

Mike Wilbur: ‘Playing at Red Rocks was monumental for us, because, as an American band, we’ve been grinding away on tour here for years and years… nine years now. It’s been a slow grind, and Red Rocks has always been this… almost championship — in our minds — of venues to play at! The fact that we were asked to play there was a huge honour, a really unforgettable experience. It was probably the most beautiful venue we’ve ever played at. Now the next step is just to headline there!’

For the benefit of those who’ve never seen or visited the venue, can you describe its layout? Is it set into the rock?

MW: ‘Yeh, it is, it’s in the middle of this small canyon of red rocks. There’s a 9000-person seating area in front of the stage and it’s just this expanse of people. It’s very surreal.’

You’re a very considerate and mindful group of musicians, in terms of allocating your time to the community projects and maintaining a balance within your lives. What has been on your mind recently in that regard? Are there particular issues, projects or ideas that you’ve been thinking about and feel compelled to act upon?

MW: ‘Recently, we’ve been very interested in working with permaculture farms: farms that grow food for local communities in sustainable ways, that give back to the earth, rather than take and destroy. It heals the soil and earth and gives nutrients back to the soil and the land that we thrive from. So working with farms that have a mission to better the earth and also, planting trees. We really want to plant a million trees, that’s our band’s mission. We’ve only planted probably a dozen so far, but, the hope in the future is to start a non-profit and have these really big events where we get hundreds of our fans together and plant forests, because trees are carbon filters, meaning they take the carbon out of the air. As humans, in our society and civilization we’re pumping so much carbon into the atmosphere and it’s killing us and everything on the planet. So, we need trees in this time more than ever, but unfortunately, we’re cutting down trees at a faster rate than has ever been cut down in human history. So we’re in a lot of trouble and we really do need trees, so that’s kind of our mission as people that have access to a crowd, y’know, a crowd of people that are willing to listen and perform these actions with us. We feel like it’s our duty to do that, so… we’re on a mission to plant some trees.’

You recently released a heavy single with rapper Tonio Sagan. How did the collaboration come about, and what’s the Moon Hooch policy on collaboration going forward? Would you like to do more work featuring other artists?

MW: ‘Well Tonio is a friend of ours. We met him through a really fantastic beatboxer named Honeycomb, who I’d recommend checking out. Honeycomb told me, “hey, I’m friends with Carl Sagan’s grandson, who happens to be a virtuosic rapper and producer.” I was like, “what!? Carl Sagan’s grandson!” So we met up with him, awesome dude, and he was just very very passionate about working with us. Y’know, hit us up every day and really wanted to just produce a track for us. So he came up to the studio with us and, we improvised some parts, he put them together, put some verses on it, and that’s Rise, that’s the single that we created with him.

We don’t really have a policy, we really would like to work with some more vocalists and MCs, but it just hasn’t really happened yet. Probably because… we like our solitude when we’re off the road, we’re not necessarily reaching out to people when we’re not touring, we’re more focussed on our personal practices, that probably has something to do with why we don’t have too many collaborations, but it is something that we’re interested to continue.’

Does Wenzl tour with a traffic cone, or does he prefer to pinch them from construction sites and traffic diversions in the vicinity of each venue?

MW: ‘No he brings his own! We found the brand that works. Our fans will hate this, but we buy them now. We used to jack them off the street, but they’re not that expensive, you can just buy them yourself. It’s like fifteen bucks. Once you start touring in a Sprinter van, it gets a little more sketchy to stop and grab a traffic cone off the side of the road, but in dire situations, we will do it.’

You’ve managed to make use of a variety of instruments within the trio. Are there any instruments you’re eager to experiment with that haven’t yet found their way into your work, or are you settled on the assortment of gear you’re currently using?

MW: ‘We’re pretty settled at the moment. We have a lot of instruments on stage: we have a contrabass clarinet, baritone saxophone, bass saxophone, two tenor saxophones, an Electronic Wind Instrument, a Moog Sub 37 analog synthesizer… sometimes we have modular synthesizers on stage — Wenzl and I are into Modular synths — and we’re running everything through Ableton live. So it’s a very elaborate setup as it is, and I feel like there’s infinite growth with what we have. We are really interested in news sounds and cultivating different sounds with different instruments, but I feel like we have our hands full with the current setup, as three players. You know, James also plays soprano sax, drums and tabla…and flute….’

What’s your relationship with Too Many Zooz like, considering that you both cut your teeth playing in New York City’s subway system and plow a similar furrow, musically speaking? Is there a friendly rivalry at play; a Beatles and Beach Boys-esque creative exchange, or are you each on a different path?

MW: ‘Oh, they’re our good friends man! I mean, Leo just stayed at my house for a few days. Yeh, we’re homies, we play basketball and chill, so… I’d say there is some friendly competition there, no doubt about it. We did both come up from the underground, but at the same time, it’s all love, we’re very different bands, we have very different outlooks and music approaches… I would like it to be more of a collaboration ultimately, than a competition, because I don’t really think too much can be gained from competition other than ego fulfilment, which isn’t really the most positive thing! I think competition should be for fun and the competitors should be aware that it’s just a game. I feel like that’s how Leo and I are, there’s definitely some friendly competition, but we’re homies at the end of the day.’

Finally, any other business: what are you looking forward to in the next few months?

MW: ‘Well, the next few months we’re gonna be in the UK, actually we’re in Norway today, then we’re in the UK. Unfortunately, I can’t bring my bass saxophone, which I would love to bring to bring to Europe one of these years…I’m excited for the upcoming gigs and festivals: we’re playing WOMAD and a few others, we have a few tours coming up, we released a single yesterday called Give Yourself To Love. Man we’re just touring, I have a solo show coming up in New York City which I’m working on…it’s just constant, y’know, everyday I feel like, even though we have these big events like Red Rocks or whatever it may be, I feel like really every day and every moment is the arrival. It’s where we’re trying to get to, here and now. I’m just trying to do my best.’ 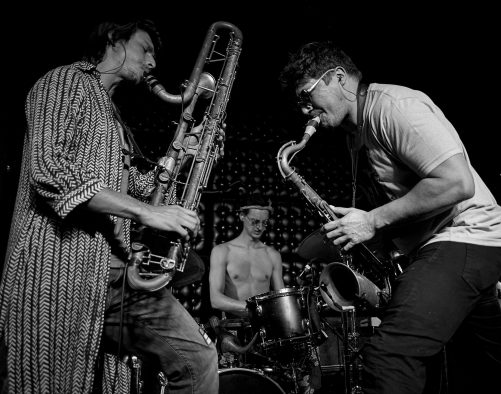 Moon Hooch is an American band from Brooklyn, New York,… 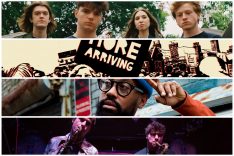