The Magic Band after party with Paddy Steer and DJ J. French

O Captain! My Beefheart! We’re throwing a free afterparty for The Magic Band’s farewell show with none other than Manchester’s zelig-like character Paddy Steer playing some delicious oddities and DJ J. French with the finest selections to take you late in to the night! Entry is free, whether you have a Magic Band ticket or not, so join us for a magical journey from 11pm.

Paddy is a zelig-like character along the timeline of Manchester’s musical activity. It’s a testament to his musicality that he has played with such a wide range of music and artists over the years, be it as a bass player, drummer, Hawaiian guitarist etc. or all these roles at the same time.

His own Homelife project released six albums in recent years, Homelife’s sound was intricate but with a warm sense of wonder, a balance of songs and instrumentals. Many musicians contributed to the Homelife project, brewed slowly by Paddy in his attic before being taken out as a small orchestra for some very unique concerts.

Never one to blow his own trumpet, Paddy quietly gets on with developing his craft. There is something of the fairy-tale cobbler working late into the night in order to make the finest shoes in the kingdom, or maybe the musical elves strike up while he’s in bed.

Recorded, it’s a sometime cartoon-like music dense with events, new textures and the colours of children’s paintings,sounds like a Swiss cuckoo clock made of egg boxes and horsehair, glued together by an African Moog player in a Vietnamese iron monger’s shop.

In rejection of the notion of ‘immaculate reproduction’, live performances err more daringly and admirably on the frontier of chaotic abstraction, expression and focussed blunder, dice rolling down the hill in case of duende, as from behind his stacked array of instruments, the anarchically intrepid punk gargles through a vocoder with his xylophone, all a-clatter under disco lights and doilies. 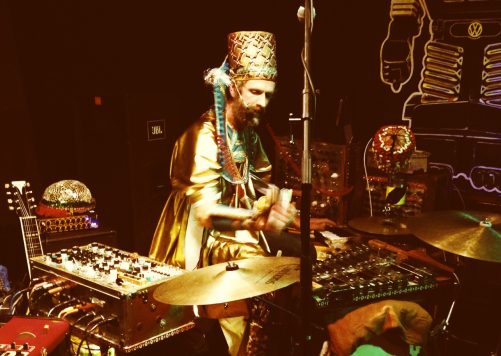