Legendary American bluesman Lucky Peterson, master of the blues guitar and the Hammond B3, in 2019 will be celebrating his 50th anniversary of performing professionally. Born in Buffalo, NY in 1964, Lucky is the son of James Peterson, a renowned blues guitarist and owner of ‘The Governor’s Inn’, a popular roadhouse club in the city and regular stop for some of the most famous bluesmen of the day. With all of the incredible talent and music going through the club, Little Lucky Peterson, as they called him at the time, learned very early in his life that his true calling was music, and in particular the blues.

At the age of three Little Lucky Peterson gave his first concert and, instead of going out and playing with the other children, he was hanging around the club learning from and starting to play with the numerous artists that passed through. One of the top artists of the day – Willie Dixon, who recognised his talent and produced Little Lucky Peterson’s first album when he was only 5 years old – “Our Future” released on the label Today/Perception Records.
Invitations immediately started to pour in for him to perform live on national TV from such major television programs such as the Ed Sullivan Show, the Tonight Show, What’s My Line and many others.

With this first album, Little Lucky managed to reach out and grab the attention of the whole country with a hit song written for him by his father “1-2-3-4” a cover version of James Browne’s big hit “Please, Please, Please”. And the rest is history!

In his teenage years Lucky Peterson played guitar and keyboards, touring and recording with such notable artists as Etta James, Bobby “Blue” Bland, Little Milton, Otis Rush, Kenny Neil and others. You can find him on many of their albums and he was also a favourite with the public wherever in the world these artists toured their live shows.

In the early 90’s he started to record his own albums on such prestigious labels as Alligator Records, Verve, Gitane, Universal, Dreyfus, JSP Records, and others and has since spent his years touring extensively – worldwide – with his group – The Organization – playing his own original style of contemporary blues, fusing soul, R&B, gospel and rock and roll. In March 2018 Lucky Peterson was nominated alongside Taj Mahal, Keb Mo and Robert Cray, by Jazz FM in the UK for this year’s ‘Best Blues Act’ award. 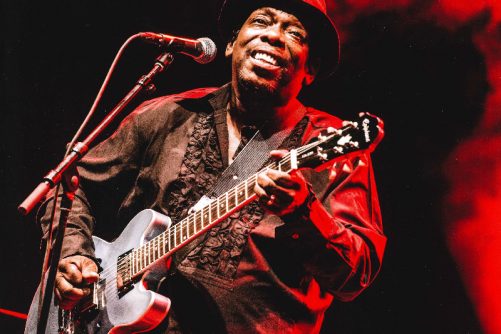