“This is a dialogue between man and machine,” say K-X-P, continuing the lineage set out by Kraftwerk all those years ago. Yet a nostalgic pursuit of such past explorations this is not, IV is an album that is emblematic of K-X-P’s ever-ceasing desire to move forward and explore new worlds, hurtling forward into new realms of minimal techno, icy synths and brooding atmospheres.

K-X-P which revolves around two main collaborators – Timo Kaukolampi and Tomi Leppänen – have now been playing together for over a decade, resulting in one of Finland’s most consistent yet ever-evolving alternative artists. As with most K-X-P records, there’s a strong thematic approach and concept at its core. For anyone that has seen the band will know, their live shows are a potent and unforgettable force. So this record was made from the energy and approach of one. “We recorded this album like we do live shows, says Timo. “No headphones, just loud monitors blasting the synths and beat boxes. Usually we make records in a studio, then after its finished we learn and rehearse the tracks and hit the road. This time we made the core of the record and started to play it live pretty much immediately after first drafts. We wanted to do things differently, to get the music in our muscle memory before recording anything. ”

The raw energy of this approach is palpable on the record. The driving, propulsive rhythms charge with purpose whilst the synth work washes over sections in giant engulfing waves, and electronics and beats collide in rocketing harmony. Whilst the record is thoughtful and doesn’t succumb to easy euphoria, it paces forward with intent and a sonic vigour that would hit audiences as hard as their live shows do. 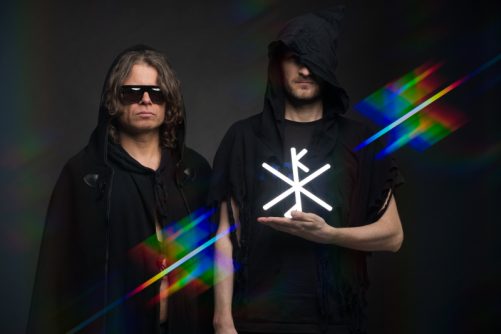