Inception to Mixdown: K-X-P discuss the making of Hex Bag

Approaching the recording of their new studio album, IV, K-X-P were determined to move their creative process forward. The Finnish outfit decided to work without headphones, recording to a roaring monitor mix of synths and drum machines – tracking their new material as they would perform on stage. The process has resulted in a lively and atmospheric duality: soundscapes accommodating the rhythms, textures and tones of minimal techno, kosmische musik and post-rock, with the energy of a live performance and the finesse of a carefully-crafted studio effort. Ahead of the band’s headline show at YES on Monday 29th April, we spoke to the band about the creation of the album’s lead single, Hex Bag, exploring the equipment and ideas that went into its recording and gaining a visual insight into their recording setup.

You approached the writing and recording of IV differently to previous K-X-P albums. Can you explain how you changed your creative process for this record and the impact that had on the new recordings?

‘We felt that nowadays there are too many options for composing music. Multitrack DAW and all possible instruments as samples, soft synths et cetera. We wanted to limit our possibilities and keep it as minimal and “geometric” as possible. We composed the whole album with the Elektron Analog Four. It has one octave keyboard and a sequencer. Four tracks. We kept the ideas between one and four bar loops. After writing we toured with the songs for a year or so.

Then we recorded all the basic tracks live without headphones. Loud monitors blasting synths and drum machines. After we got those basic drum, synth, demo vocals and guitar tracks recorded, we started to jam on top of that with some analog synths and vocals.’

What was the core idea that sparked the creation of Hex Bag? Was it the arpeggiated synth loop that runs through the track, or another element?

‘The basic tracks were first: live drums, bass drones and a rudimentary drum machine loop. Also chant vocals, that were recorded live with the track. It was pretty cool, but needed some “out of the box” element. Tomi Leppänen, long time drummer of K-X-P, came to the studio and we set up a TR-808 to trigger the Juno-60 arpeggiator. Tomi is a drummer so he made that sequence feel more like percussion. I added those H3000 reverbs live while Tomi was jamming out with Juno 60.’

What kind of thoughts and emotions inspired your lyrics and informed the sound of Hex Bag? Were there particular ideas that you wanted to capture in that track and that we can recognise in the vocals or instrumentation?

‘The vocals are combination of live “nonsense” and words in the chorus. Lyrics are kinda free floating metaphysical chants. I must add that I know exactly what the title and words are about, but I’d like to keep the secret. In the end mystery is more interesting. All vocals of the album were re-recorded on C-cassette or a vintage Nagra reel-to-reel tape machine during mixing to get nice, gritty vocal sound.’

The production on Hex Bag is incredible – you’ve managed to craft a giant sound from quite minimal elements. What kinds of gear, effects and techniques did you use to make the synths, drums and vocals so large and impactful?

‘I think you said it. It is minimal. It has only a few elements. But when you focus on those: keep some elements dry and add huge reverb to some others, you create that huge dimension.

Drums can only sound big if there is not many elements in their way. We spend lots of time experimenting and running individual tracks and stems through outboard gear and effect pedals, like the Analog Heat distortion unit to two H3000 processors and sequenced modular synth manupulations, and manually tweaking the parameters to find the inspiring treatment.

Also we played a lot with mono/stereo picture. My Thermionic Culture “Fat Bustard” valve summing mixer has excellent stereo spread possibilities that create really 3D spaces. But you have to be careful not to make sounds out of phase. Lauri Porra from Statrovarius provided the live bass track, and he has been spending years in the power metal scene honing in his pedal setup for enormous bass sound.’

Having recorded the track, were you and Tomi hands-on with the mixing, or did you have specific instructions for the producers and engineers involved in finishing the track?

I mixed the album in my own studio with Ville Hyvönen. He was also mixing my solo album “1″.  The reason for this decision was to be able to take all the time needed for the mixing, instead of having the limited time window in more fancy commercial studio. The process took about three months in total. Pretty early on the process, I mix stems that I usually use on the record. I like to limit my options as early as possible and turn the focus from sound to music. I find it so much easier and inspirational to work with good drum stem than multiple tracks. Yngve Saetre mixed the stems on this record. We did it in Duper Studios Bergen.’

We’re currently enjoying a single edit of Hex Bag. How does the album version differ from the edit, and can we expect to hear it live on the forthcoming tour?

‘The album version is maybe three minutes longer and it builds more in the beginning. I prefer the album version. We have been playing Hex Bag live few times and will play it on our tour.’ 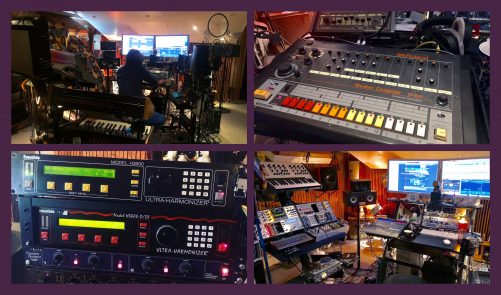 “This is a dialogue between man and machine,” say K-X-P,…