Fronted by Nigerian singer Eno Williams, Ibibio Sound Machine is a clash of African and electronic elements inspired in equal measure by the golden era of West-African funk and disco and modern post-punk and electro.

Ibibio Sound Machine were founded by Williams and Max Grunhard in 2013 with the idea of combining the unique sound of the Ibibio language that Eno spoke growing up in Nigeria with both traditional West African and more modern electronic musical elements. They linked up with Merge Records in 2017 for Uyai and returned with Doko Mien in 2019.

“Even in trying times, “without love, there’s no electricity.” This one started out as an idea to mix Afrobeat with Giorgio Moroder–style synth vibes. The end section with Alfred’s korego (Ghanaian 2-stringed folk guitar) solo was already there when we got into the studio, but then we added the big kick drum that happens underneath and Owen from Hot Chip’s crazy drum machine percussion at the end, which gave it a futuristic Afro feel when mixed with the more talking drum parts.”

“a groove-driven melange of styles which also takes in gospel, funk, post- and electro-punk and contemporary R&B, alongside African polyrhythms, horns and guitar” —Guardian

“Led by singer Eno Williams, Uyai becomes a wildly diverse mix of global sounds whose focus this time has turned to themes of liberation, power, and beauty—specifically that of women.” —Pitchfork

“Building on the fresh inventiveness of Uyai, this new album cheerfully chops up and reassembles genres in a way that is seriously funky.” —MOJO

“No one is crushing different sound worlds together quite as compellingly as them right now.” —DJ Mag 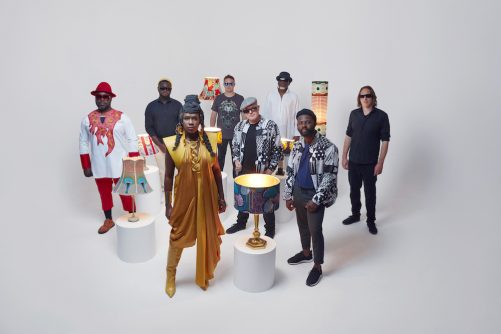