It isn’t easy leading a big band. The great Quincy Jones famously ran up $145,000 of debt touring his 30-piece ensemble through Europe on the ‘59-60 Free and Easy tour. Yet the large ensemble can produce an unrivalled sound, especially in the arena of funk and soul music, where rich horn arrangements and the punch of the rhythm section are essential. Nottingham’s Invisible Orchestra demonstrate this unequivocally, bringing a variety of styles into their vibrant and forceful sound. But how does a band such as theirs continue to run smoothly, given the many things that must combine in order for them to shine? Ahead of their return to the Craig Charles Funk & Soul Club this month, we asked bandleader James Waring just that…

How did The Invisible Orchestra form? Was the band put together with specific ideas in mind, and how quickly did it take shape?

JW: I’d been touring in several bands, meeting so many great musicians that I’d like to play with, and had a lot of writing ideas for a larger group, so to cut a long story short, I put together The Invisible Orchestra from a wish-list of players and developed it from there. There must be a fair amount of masochism thrown in for good measure too!

Running a group with at least sixteen members must be a big logistical challenge. How do you keep things running smoothly in the Invisible Orchestra camp?

JW: Yes, we’ve had a few different versions of the orchestra and a lot of very talented musicians pass through at different stages. One show we had 43 people on stage and stayed as a 24 piece for a few years too. The 16-piece we have now is the tightest, most settled and best sounding we’ve ever had and gaining momentum often means gaining really great new musicians. Keeping things structured regarding regular rehearsals, maintaining good communication and always having things in the diary to work and look forward to always help. I also have a large array of deadly weapons and the threat of ultra violence hovering over them at every turn, which I use at will should anyone step out of line…

What are your thoughts on the music scene in Nottingham? It seems like there are plenty of independent venues and resident musicians, First Love studio, a good few record shops…does the city get its due in the national conversation?

JW: The Nottingham music scene has had quite an upturn over the last 10 years with obvious people like Jake Bugg having big commercial success. The more underground scene is pretty strong with some really great diverse bands and promoters constantly pushing things through. Sadly not so great for independent venues, with long-standing legendary places like The Maze closing their doors this year, and studios like First Love being made into student flats. The arrival of places like Rough Trade a few years back and most recently Metronome has helped bring in bigger bands in Nationwide aside from the standard Rock City, Bodega, Rescue Room gigs with The Invisible Orchestra playing two sold out shows at the amazing state of the art venue Metronome over the last year or so.

What can the Craig Charles Funk & Soul Club crowd expect from this month’s set?

JW: We’ve got such a great set at the moment with some exciting new material and a couple of new, fresh members debuting alongside musicians who’ve played with the likes of The Specials, Lee ‘Scratch’ Perry, Amy Winehouse, Jamiroquai and more, all squeezing onto the Band on the Wall stage and hammering it out like our lives depend on it. 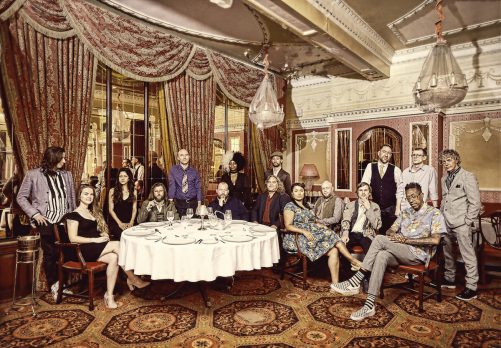