Saxophonist and bandleader Trish Clowes has a palpable rapport with her bandmates Ross Stanley (piano and organ), Chris Montague (guitar) and James Maddren (drums). Together they are My Iris, a dynamic quartet whose work has been praised for its accessibility, consistency and focus. Fans of Wayne Shorter — one of the renowned figures who came up during our conversation with Clowes — will certainly recognise each of those characteristics in the band’s work, which is guided by Clowes’ cultured and articulate saxophone work. Having just released a new music video, we caught up with Trish to discuss the theme of the visual, how she met her bandmates and how she keeps busy away from the bandstand. The group perform live at Band on the Wall on 2nd May.

Can you tell us about the video for Abbott & Costello and what director Rose Hendry wanted to capture with the video?

TC: ‘Abbott & Costello was recorded last year for my album and it’s named after the heptapod aliens in Denis Villeneuve’s movie Arrival (who were named after the comedians), and the music features various nods to the story and the score. I was introduced to Rose through a mutual friend – I had been searching for the right kind of person to work with for a music video, which is a new experience for me. When we first met to discuss the project and the music, everything just clicked straight away and I knew I could completely trust her artistic judgement. Rose was keen to capture a feeling of discovery, the idea of becoming lost and ultimately getting lost in the music. Keen to showcase the music and stay true to the form of improv and jazz ,it was clear to Rose that the instruments should be put front and centre. The resulting video is a tribute to the instruments that get used day in and day out, that us humans use to express something inside of us.’

How did you meet the musicians who play in My Iris, and what was it about their personality or ability that made you want to work with them?

TC: ‘I’ve known them all a long time, over 10 years, through hanging out, studying and gigging in London, we’re all good friends. It’s difficult to quantify any of them really, they are all such unique, generous people and players. They constantly inspire me to write new music, and I am always excited to hear what they will do with the music on any given night. Between us we can go from Brahms quotes (yes, Ross has actually done this) to full scale rock out to poetry to… the list keeps going. I’ve just written some new tunes for this tour actually. May the experiments continue.’

For the benefit of those who’ve never played in an ensemble – or perhaps don’t play at all – how important is the dynamic of a group and the relationship of its members to the outcome of the music?

TC: ‘Very important. It’s like four people hanging out in a pub, chatting animatedly without anyone getting left out of the conversation, and everyone buying each other drinks… how’s that for an analogy?! There’s a Wayne Shorter album called Without a Net – it’s like that. And actually one of the songs on the new album called Free to Fall is about that same thing – take a risk and someone will be there to catch you!’

Who are the saxophonists that have informed your playing over the years, be they tutors or international artists past or present?

TC: ‘Key people would be Mr Shorter as mentioned above, Iain Ballamy, Joe Henderson, Lester Young, Joe Lovano… and more recently I’ve been enjoying Mark Shim’s playing… I would really like him to release another album…’

What are your thoughts about British contemporary jazz music and the scene around it at present? Are you enthused by what you see, would you like to see things change and do our times feel inspiring on an artistic level?

TC: ‘It’s brilliant to see the music being celebrated so much, for sure. Jazz is always going in and out of fashion with the media – it’s a pretty quirky form of music… But each time it gets its limelight I like to think of all the amazing music that will get unearthed by curious listeners.’

Aside from music, what are the things that matter most to you, or that you commit time to?

TC: ‘I’m pretty absorbed in music to be honest. Running is good for me… getting me outside, staying in shape for dealing with the tenor saxophone! I like a good debate, good conversation… I stay in touch with what’s going on in the world… and sometimes that spills into my music. My idea of a perfect evening is doing a gig and then hanging out with the players and family afterwards.’ 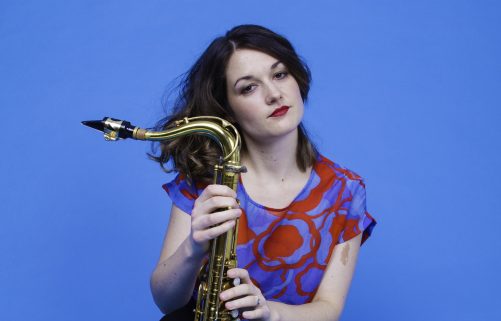 This intense and thrilling band represents the front rank of…