Sound of the Sirens Discuss their Writing Process, Love for Running and Fab New Video

It’s easy to warm to Abbe Martin and Hannah Wood, the singer-songwriter partnership known as Sound of the Sirens. Their passion for their craft, great sense of humour and positive outlook on life permeates everything they do: from their outstanding studio records, light-hearted music videos, and broad-reaching headline tours, to their activities away from music, such as the running that has seen them raise thousands for worthy charities.

Their balanced, holistic approach to artistic life has yielded some fantastic songs, which we’re looking forward to hearing upon their return to Manchester on 28th March. Having sold out The Eagle Inn last year, we’re thrilled to be welcoming them to Band on the Wall, supported by local lad and outstanding songwriter, James Holt.

Ahead of the show, Abbe and Hannah told us about their desire to get their trusty touring van into a music video before its motor ran out, how their songwriting process has developed and how they’ve come to appreciate buying second hand clothes.

How has your songwriting — and the ways in which you write — developed since you made your first album? Have you discovered an ideal sort of place to retreat to in order to induce creativity or stimulate new ideas?

‘We’ve always been quite creative with our writing process: from taking turns writing a line on old scraps of paper, folding it and passing it on and seeing what is made on the end, to writing poems and adding melodies or simply jamming. We certainly take longer these days to write. We’ve become perfectionists and over think every minute detail. We often write at home but are forever recording ideas on to our phones. If they were ever taken ….it would be embarrassing.’

Your new video for Awakening has captured people’s hearts and tickled their funny bones. Where did the video idea begin and how did you pick the pairings you depict?

‘As a duo we rely heavily on one another for everything: chats, laughs, cries. We began to think about other duos and the idea was born. We wanted to include Roger the van, as we aren’t sure how much life he has left. The video has been so well received and we had the most fun making it. Samantics, who toured with us last year, had the idea of

Thelma and Louise. and then the idea developed from there.’

You’ve done plenty of running for good causes in recent years, raising over £4,000 for MIND last month. Given how divisive running can be, some loving it and some hating it, what do you love about it? What led you to choose MIND as the charity to raise funds for?

‘Running is a powerful tool for happiness. When we run we leave behind worries and have time to think and organise thoughts. A good playlist always helps and Hannah swears by running to Music with a certain BPM. Running is great for the body but more importantly the mind. After writing our song The Voices, we began to use Mental Health charities as our charity of choice. MIND does some incredible work with people we know and it was a no brainer.’

Your vocal harmonies are a cornerstone of your sound and a beautiful feature of the new album. Does harmonising and the arrangement of vocal parts arise naturally, or is it something you sit down and work out theoretically?

‘I think after working together so long we have a synergy that dictates what we do and we often naturally fall into certain harmony lines. There are always sections we have to really work on….but we love it.’

Having seen you tweet about refillable drinks bottles in the past, what are your thoughts on Glastonbury festival outlawing the sale of single use plastics? Have you come across any other cool, environmentally-friendly ideas that you’ve worked into your lives recently?

‘We think Glastonbury are champions for what they are doing. A festival that big needs to set an example to others. We have one planet and we all have a responsibility to be kind to it. If everyone does one small thing to help, the knock on effect is huge. We watched an incredible Stacey Dooley programme about the Fashion Industry’s effect on the globe and we were shocked. We love to buy 2nd hand and old Vintage clothes. Let’s stop being a throw away society.’

What’s the most impressive or unusual place music has taken you, thus far? Is there anywhere you’re yet to visit that you’re hoping your work may take you to?

‘A highlight has to be the Channel 4 TFI stage… it would be hard to top that! However we would love to be on a quiz show, the stars (not quite) in reasonably priced cars, Hannah said she would like Strictly, hahaha, and I’ll be happy to have a cameo on anything to do with Ricky Gervais. It would be amazing for our music to be used for TV and to reach more people. It’s every musician’s dream… that our music will be out there.’ 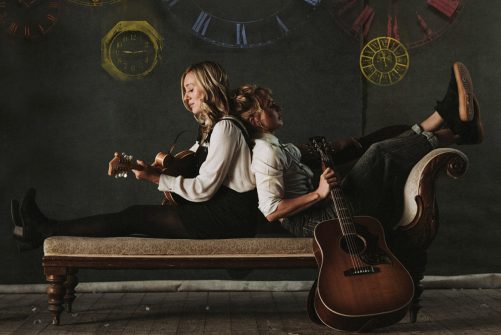 Sound of the Sirens + James Holt

Following their sold out show at the Eagle Inn, Band…