ACR on Manchester music, why everyone needs to know about Gramme and their forthcoming re-issue series

Since forming in the outskirts of Greater Manchester forty years ago, A Certain Ratio have made lasting contributions to the region’s musical heritage, with era-defining singles and LPs at pivotal points during the City’s musical development. When post-punk was the flavour of the moment, they dropped the razor-sharp Do the Du. As clubbing realised it’s Balearic dreams and sampling snuck into pop, a Latin percussion-laden liquid funk cut utilising the AKAI sampler, Nostromo a Go Go. When Manchester’s acid house scene took hold shortly thereafter, the dripping TB303 goodness of Good Together. They’ve ticked off 33 ⅓, they’re five years shy of 45, but four decades are there to be celebrated! Ahead of their show at The Ritz with the exceptional Gramme (like ACR, a big influence on LCD Soundsystem’s James Murphy) we spoke to Martin, Jez and Donald about their forthcoming re-issue series, the importance of the Manchester Musician’s Collective and their favourite Manchester cuts from the past 40 years.

Mute records are soon to begin a comprehensive ACR re-issue package, culminating in a new compilation next spring. How involved have the band been in the project and has it seen you paying greater attention to your early work, as you assemble your set for next month’s show?

Jez: ‘Mute are a great label, they are very creative and are as passionate about the music as ourselves. It’s a large catalogue of music and there have been many discussions about the way in which it will look and the way it will be released. The show will feature tracks from every decade of the band’s output, we’re really looking forward to our first hometown gig for quite a while’.

Martin: ‘We have been going through a lot of old masters digging out some rarities and tunes we had forgotten about. The best thing about the re-issues is that the stuff we did on A&M and Robs Records will be available again and this stuff has never been re-issued. ACR:MCR and Up in Downsville represent and important period for the band and also feature the current line-up of the band so they feature quite strongly. However, the set features our whole back catalogue spanning from 1979’.

The band’s ties with Band on the Wall stretch back to the days of the Manchester Musician’s Collective, when yourselves, Joy Division, The Fall, Spherical Objects and others were picking up steam. How important (if at all) was the clique to ACR’s development and to that of your peers, and do you feel any bands from that collective are yet to receive the credit they deserve?

Jez: ‘The Manchester Musicians collective was very important to the development of bands in Manchester. It provided a gig for bands that were starting out, they were supported by the Arts council which paid for the hiring of Band on the Wall. It was a chance to play to an audience and for many, a chance that they would otherwise not have had’.

Martin: ‘Band on the Wall has always been an important venue for ACR and the highlight of our career was playing our 33 1/3 birthday gig there and getting past members like Simon Topping, Peter Terrell and Andy Connell on stage with us as well as the late Stuart ‘Jammer’ James. My Dad always used to tell me that he used to go to Band on the Wall when he was in the RAF just after the second world war, so it has been an important venue for generations of Mancunians. I think all the bands from the Musicians Collective went on to do good things and success is not only measured by fame and fortune but by doing something creative to add to this great city of ours. Don’t forget kids, our gig is at The Ritz but is being promoted by Band on the Wall!’

There’ve been some unbelievable records produced in Greater Manchester during the last forty years. Do you have any personal favourites from the region, be those 45s, 12” singles, LPs, mixed cassettes or dub plates?

Annette – Dream 17
‘Best house tune to come out of Manchester.’

Intastella – Dream Some Paradise
‘I loved working with Intastella and this is the most fun I have ever had producing a record.’

World of Twist – Jellybaby
‘Manchester’s most underrated band (apart from ACR) and another tune I had the pleasure of producing.’

A Guy Called Gerald – Hot Lemonade
‘Everyone always thinks Gerald has one tune, they are mistaken.’

LoneLady – Groove it Out
‘Love LoneLady!’

Levelz – LVL07
‘They are the best thing to come out of MCR in recent years. Check the video out to this tune!’

The Smiths – How Soon is Now

Marcel King – Reach for Love
‘Should have been a massive hit. (produced by DoJo)’.

10cc – I’m Not In Love
‘A game changer, pre samplers, a classic created with tape edits and ingenuity at Strawberry Studios Stockport.’

When Gramme’s incredible record Fascination was out in 2013, you could briefly find it in Piccadilly Records’ ‘disco-not-disco’ section. What can you tell us about the band that that description doesn’t and what might people expect from them opening for you in Manchester?Martin: ‘I love Gramme and this will be the third time we have played together. I always have ‘Like You’ in my box if I play anywhere. A very underrated band who deserve a lot more recognition than they have received over the years. A bit like ACR in that everyone who likes Gramme have got excellent musical taste but there are not enough of those people to sustain success. They are amazing live and because this is a pretty early gig make sure you are there by 7.15 to witness a brilliant set from them. They have been working in the studio recently and expect a new album from them.’

You cut a wicked remix of No Zu’s Body2Body not long ago. Can you tell us how that came about and how you approached the source material to create the new mix?

Martin: ‘Jason Boardman, of Aficionado fame, got in touch with me and said there is this great band from Australia who are big fans of ACR and they want you to do a remix of one of their tunes. He put me in touch with them and they sent me their album.  From this we picked which tune we would like to work on and decided that we would rather rework the tune and play on it so that they get an ACR version of their tune. We stripped the whole song back to vocals and a few other key parts and basically played drums, bass, guitar, trumpet, vocoder, TB-303 and percussion over the basis of their track. We used a lot of ACR references including ‘DoThe Du’ and it turned out really well! They were very happy with the outcome.  Since then we have done similar projects with Barry Adamson and the Charlatans’.

We loved the Discography Lepidoptera you put together earlier this year, have you any further visual projects in the pipeline and does the butterfly aesthetic feed in any way into your live production?

Donald: ‘The A2 ltd. edition butterfly print & postcard booklet were very well received. We are looking doing some prints to coincide with the Mute re-release of our entire back catalogue which starts on Nov 24th and carries on throughout 2018′.

Get your tickets for A Certain Ratio’s O2 Ritz show here. 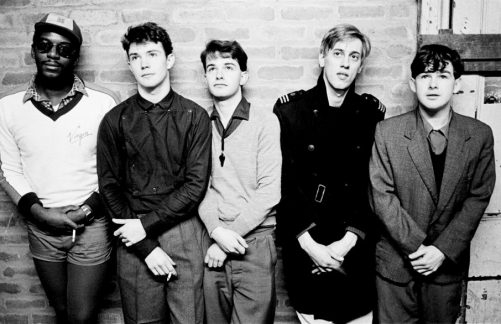 A Certain Ratio + Gramme at the O2 Ritz, Manchester

Manchester’s A Certain Ratio embraced the ethic and culture of… 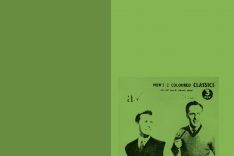 A Certain Ratio are an English post-punk band formed in…