“The Midwest’s answer to the Roots”, Youngblood Brass Band are focused on creating consistently progressive, groundbreaking acoustic music, and employing whatever sonic means necessary to do so. The nine-member ensemble hail from all over America (Madison, New Orleans, New York, Nashville, Minneapolis, Chicago) and have been unleashing their crash course in hip-hop/brass band/improv/punk on stages worldwide since 2000.

What other band can claim the honour of having their music spun by DJs like ?uestlove (of The Roots), working with hip hop luminaries like Talib Kweli, having their original compositions performed by student marching bands and jazz ensembles around the globe, and still not be out of place on an all-punk bill? What other band brings together the ostensibly disparate worlds of the trombone geek and the backpacking b-boy?

Youngblood have headlined countless tours worldwide, selling out dates in over 20 countries. Their festival résumé reads like a list of the most important music events in the world: Roskilde, Glastonbury, Lowlands, Pukkelpop, SXSW, CMJ, North Sea Jazz, WOMAD, ad infinitum. Incendiary live shows have secured the band’s status as an incredible group to witness, whether in an intimate club setting or in front of thousands on a festival stage.

“It would take a hard heart indeed to watch one of these troupes playing live and not want to join the parade.” – The Guardian

“Sonically adventurous jazz with funk, soul and hip-hop” – The Independent

DJing on the night is In the Loop 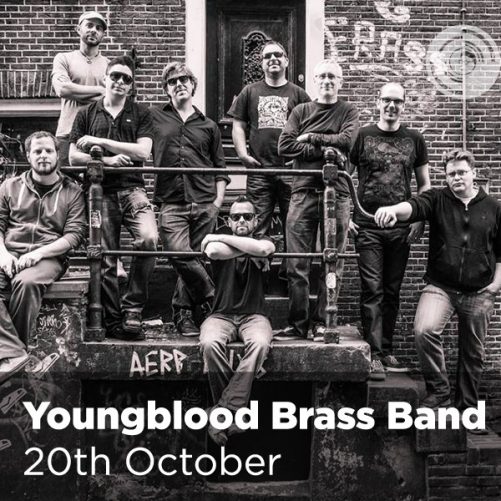