A Bahraini-British performer, Yazz Ahmed is giving a new meaning to modern jazz. This trumpet and flugelhorn player has worked with Radiohead and These New Puritans, experiments with electronic effects, and shapes her own musical universe from that legacy. Part of the new wave of artists who are eager to break the old codes of jazz, such as Kamasi Washington, Yussef Kamaal and Christian Scott, Yazz Ahmed is thrilled by the possibilities of making something new. “I feel like I’m a part of modernising jazz and connecting it with audiences today,” Yazz says. “It’s exciting.”

Her new album ‘La Saboteuse’ is a deep exploration of both her British and Bahraini roots. Assisted by musicians including Lewis Wright on vibraphone, MOBO-winning new jazz kingpin Shabaka Hutchings on bass clarinet and Naadia Sherriff on Fender Rhodes keyboard, it is composed of undulating rhythms, Middle Eastern melody and Yazz’s sonorous trumpet lines. The theme of ‘La Saboteuse’ is the sense of self-doubt that Yazz feels when she is creating, personified in a female saboteur, an anti-muse that spurs her into action. “Giving ‘her’ a name has really helped me to identify those negative voices we all get,” she says. “I know what it is and I know how to combat it.”

This is a mixed seated and standing show. 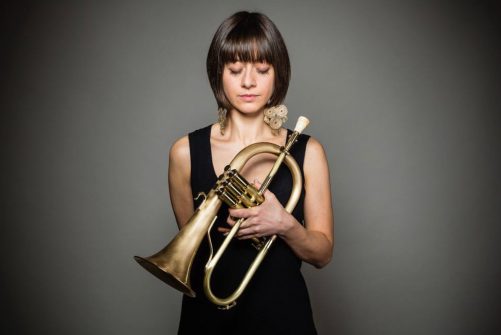