After December’s XFM First Friday with The Strypes sold out in record time, XFM reboots its legendary indie-disco for the New Year. January features full live sets from XFM ones to watch The Cape Race, Young Kato and The Tea Street Band followed by an all killer, no filler dance party with mistress of ceremonies, XFM DJ Jo Good.

Since their formation in 2010, The Cape Race have been writing tirelessly to perfect their first LP. Their first six-track sampler Now, Voyager, was downloaded over 20,000 times without any label support. The band have appeared live alongside The Cribs, Badly Drawn Boy, Liam Frost, Parachute, Don Broco, Tellison, The Dangerous Summer, The Xcerts, Pegasus Bridge, Natives, Blitz Kids, Nina Nesbitt and many more all over the country.
“Driving yet delicate, brash yet beautiful, essential and utterly genuine, take note: The Cape Race are here to stay.” – BBC

Having spent the entire first half of 2013 headlining shows across the UK in support of their debut single ‘Something Real’, recent BMG signings Young Kato are now holed up in the recording studio working on their debut album with producer of the moment Dan Grech, who has previously worked with Radiohead, Beck, The Vaccines, Howling Bells and Lana Del Rey. Recent single ‘Drink Dance Play’ is already a huge live favourite at the bands sold out shows, regularly bringing the house down as their set closer with fans singing along in epic fashion to the wall of sound they produce as the song continues to build.

Completing the lineup is Liverpool’s The Tea Street Band. They are perfectly summed-up by BBC Introducing’s Dave Monks: “Think of 808 state having a meeting mid channel to hear some French electronic by Space Disco”.  The Tea Street Band’s debut album is recorded and ready to drop sometime during Winter 13/14.

And of course, Jo will be providing music that rocks until the early hours; from game-changing classic anthems to new talent such as Peace, Jake Bugg and Foals, you’re guaranteed to be dancing to the very best rock, indie and alternative music spanning both time and genre. 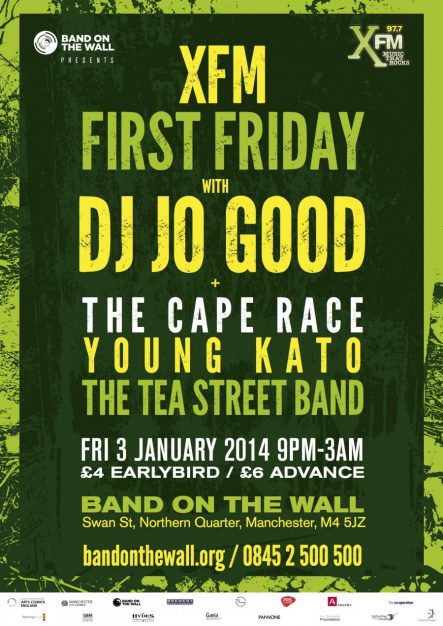