*Please note this show has been rearranged from Gorilla on 15th October 2019. All original tickets remain valid.*

Introducing Winston Surfshirt, the Sydney-based band quickly winning over fans and industry alike with their unique blend of soul and hip-hop – the auditory equivalent of A Tribe Called Quest splitting spliffs with your parent’s favourite band.

Having developed a cult following with their smooth style and raucous live shows, the band originally emerged as the solo project of singer/rapper/producer Winston Surfshirt, before organically adopting other local artists and snowballing into what is now a six-piece musical collective.

While cutting their teeth on the Sydney underground scene in 2014, Winston Surfshirt quickly won over a religiously loyal fan base. Thereafter, 2016 saw namesake Winston earn nods from Triple J and Majestic Casual for the buttery-smooth solo vocal feature he laid on Polographia’s hit track, ‘Sly’.

In 2017 Winston Surfshirt are “the stars of the show”, as touted by Sir Elton John, who counts himself a vocal fan, among others including Zane Lowe (Beats1), Jason Bentley (KCRW) and Huw Stephens (BBC Radio 1). After a shining start to the year supporting RÜFÜS on their Australian tour and Midnight Oil at their comeback show before their world tour, the band released two critically acclaimed singles – ‘Be About You and ‘Ali D’. With both singles drifting through radio speakers, stereos and headphones around the globe, it’d be hard to miss the rapid rise of Winston Surfshirt – ‘Ali D’ even nabbed most played track of the week on triple j for two consecutive weeks. Going on to sell out all 7 shows of their debut national tour, Winston rounded it off with a coveted spot on the renowned Splendour In The Grass bill.

‘Same Same’ is the latest offering from the band – armed with a throbbing bassline, catchy chorus, vibrant jazz-infused interludes, and, as always, complemented perfectly by Winston’s signature vocals. With their debut album Sponge Cake set for release September 29 via Sweat It Out, and a national tour to celebrate, Winston Surfshirt are fast becoming one of Australia’s most prolific acts.

If you know, you know.

This is a standing show. Presented by DHP Family. 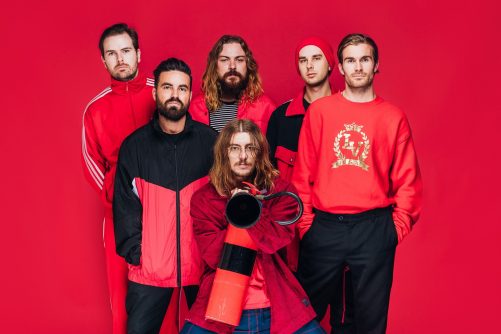