This February, singer-songwriter Beth Orton leads the Wall of Sounds Artistic Directors Series, collaborating on new material with 13 specially selected up-and-coming female musicians during a week-long residency at Band on the Wall. On 20th February Beth and the residency participants will perform the fruits of the week’s endeavours, live at a special finale event.

Beth Orton is a BRIT Award-winner and two-time Mercury Prize nominee who has collaborated with Bert Jansch, Emmylou Harris, Beck, and Terry Callier among others. Her masterful songwriting and emotionally evocative vocal style – infusing intimate folk reminiscent of Nick Drake and Joni Mitchell with lilting and subtly atmospheric pop flourishes – has continuously evolved, yet always retained an intriguing mix of fragility and transcendence which never fails to move and inspire fans around the world. Her most recent album is 2012’s Sugaring Season, which Vogue called “A beautiful timely album, full of melancholy.”

Beth’s wealth of experience in the music industry, the eclectic mix of genres she works in, and her experimental approach to creating music all add to what will be a brilliant week and a truly unique performance.

The Wall of Sounds Artistic Directors Series gives emerging musicians a unique opportunity to experiment, collaborate and perform, encouraging new ways of working, thinking and approaching creativity. This way of connecting and supporting musicians was something that appealed immediately to Beth:

“I am thrilled to be asked to support and take part in this exciting and important project. Getting the chance to mentor — or simply the opportunity to stand as witness to — the diverse, and possibly unheard, talents of artists from all across the UK fills me with curiosity and some apprehension!  If I’m lucky I will get to share some of what has been passed along to me over the years.”

We expect another sold out show, so be quick if you want to get tickets for this truly original, one-off performance.

Wall of Sounds is produced by Brighter Sound and hosted by Band on the Wall. Funded by Arts Council England’s Grants for the Arts Fund. 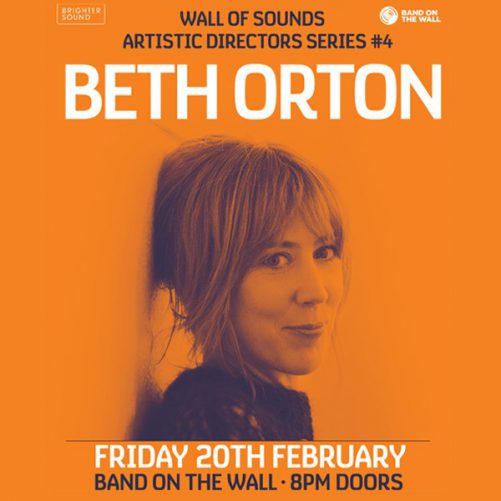