Described as “purveyors of the finest unpredictability”, Transglobal Underground have been producing eclectic, world-music inspired electronica since 1991.

Their sound is inspired equally by UK club culture, Asian, African music, which is often labelled ‘world-fusion’ and ‘ethno techno’. They reached international recognition when their single ‘Temple Head’ was used as part of an advertising campaign around the 1996 Olympic Games.

Their work has been remixed by Dreadzone, Lionrock and Youth and they in turn have remixed tracks for Warsaw Village Band, Banco de Gaia, Fun-Da-Mental, Transjoik, Pop Will Eat Itself and Tragic Roundabout.

Special guest for this show is Banco De Gaia. A regular Band on the Wall performer, Banco De Gaia has been performing and releasing for over 25 years now, along the way becoming one of the music industry’s most maverick innovators. His legacy is as glittering as it is diverse, ranging from Hollywood film sound credits to the critically acclaimed ‘Last Train to Lhasa’, first released in 1995 to a rapturous reception. 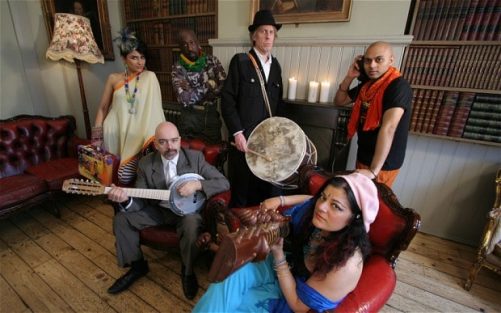