Following the release of his new album, ‘The Best Is Yet To Come’ and the lead single ‘Rising Up’, Tony Momrelle has assured his position at the top of the UK soul league.

“…dripping with the classic soul vibes of Donny Hathaway and Stevie Wonder” – Soultracks.com

One of the lead male vocalists of the legendary band Incognito, Tony Momrelle has enjoyed an internationally successful career and cemented a loyal following of fans, not least the DJ and broadcaster Gilles Peterson, who signed the band’s first album to Talkin Loud, spearheading the Acid-Jazz movement. Momrelle launched his solo career with the 2015 album ‘Keep Pushing’ to resounding success, securing four BBC Radio 2 supported singles, ongoing airplay across Europe and sold-out audiences at venues and festivals throughout the world.

Recent media appearances include an intimate performance with Jools Holland live on BBC One’s flagship music show ‘Later…’ and distinguished collaborations with the Guy Barker Orchestra and Big Band for BBC Radio 2, the latest of these being a performance at the London Coliseum alongside Gregory Porter & Friends for ‘Friday Night Is Music Night.’

Despite this, achieving this level of resounding success and experience, Tony Momrelle’s solo career is still very much in its infancy. Only now is it his turn in the limelight as he presents his talent for songwriting alongside the singing that has held him in such high esteem. ‘Rising Up’ and the new album are a further development of Tony Momrelle’s signature sound: refined, authentic, contemporary UK soul. 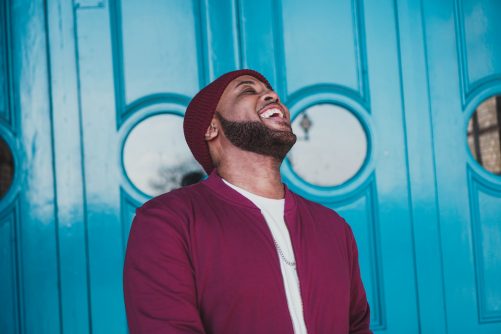