It was 10 years ago, in a house on the outskirts of Santiago, Chile, that Ives Sepúlveda Minho and Manuel Parra started playing music together, and The Holydrug Couple was effectively born. A decade later, they’ve made Hyper Super Mega, an album that represents the culmination of everything they’ve learned in their years as a band.

If Hyper Super Mega feels like a classic pop record, that’s because Sepúlveda and Parra spent much of the recording process thinking about the classic pop records of the ’60s and ’70s. Masterpieces by bands like The Beatles, The Beach Boys, and Fleetwood Mac were all reference points, not always explicitly in sound, but certainly in spirit. The duo approached the mythos of the “classic album” from their own inimitable psych-pop perspective, hoping to make a record that felt authentically like The Holydrug Couple that could fit into the same canon. By that criterion, Hyper Super Mega is a massive success. All the elements that made the band’s previous albums Noctuary and Moonlust great are distilled to their purest essence and rendered in obsessive detail.

Not only is Hyper Super Mega the most fully realized Holydrug Couple album to date, it’s also the best-sounding. In the three years since the release of the relatively low-budget Moonlust, the band went out and got a bunch of new gear, including high-end mics and synths. For Sepúlveda, that was revelatory. “It gave me a wider palette of sounds that I wasn’t aware of,” he explains. “That helped me to center more on details and the different emotions that different sounds and ways of singing can give you.”

That expanded palette led to songs like “Waterfalls” and “I’ll Only Say This,” which trade the bedroom vibes of the band’s earlier work for widescreen pop bliss. Even the experiments, like the electronic-meets-acoustic “Easy,” are as self-assured as anything the band has done. Hyper Super Mega is a capsule history of The Holydrug Couple, incorporating a decade of experience recording, touring the world, and absorbing the sights and sounds of their native Chile. It marks the 10th anniversary of a band whose next 10 years look even brighter.

This is a standing show. Presented by Band on the Wall, Grey Lantern and Manchester Psych Fest. 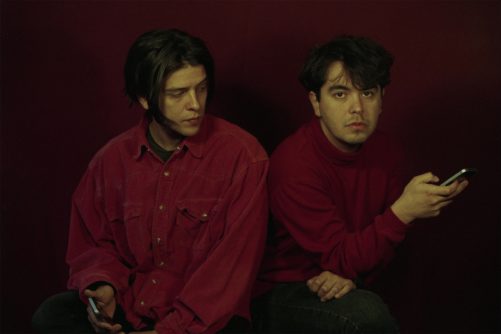