Sweet Nothing, a faceless movement which raises money for the homeless and non-profit organisations through music, art, booze & food, combine with Manchester-based record label Room 2 Records to present local bands, musicians and artists joining forces for a storm of a do-good event. All proceeds raised will go towards tackling homelessness in our city.

Berry has recently found recognition on some of the UK’s and Europe’s most renowned stages with ‘The Mouse Outfit’ (See “Jagged Tooth Crook Tour”) and has just in the last year released his debut 17 track album via Room2 Records.

The project speaks on love, lust, loss, ego and much more. With features from Manchester heavyweights like HMD, Sangy and [ K S R ], “From Maia” boasts a range of styles, sounds and flavours, with vibes to take you from Lazy Sundays to Saturday night sessions. When it comes to the beats Berry calls upon production legends Kydro, Metrodome and Dom Hz, to add elements of added production and engineering, that make the 24 year olds album, one not to be slept on.

Originally born and raised in Portugal before moving to the UK at a young age. Manchester’s “Flex The Foreigner” is a musical blend of sounds that come from both his native home and his adoptive one. Although he considers himself a “lyrical rapper” in a sense, he isn’t afraid of stepping away from that territory to do something more experimental. His style is one that morphs with the passing of each track and in his own words “will continue to do so, in order to create something fresh and unexpected”.

His new Ep in collaboration with producer Kydro is out now, entitled ‘Sorry I’m Late’

Two of Manchester’s most prolific MCs are teaming up to bring you something a bit different. Expect new music, classic tracks and a healthy dose of banter.

Sig aka MISSPHIZZLEDOTCOM is a Mancunian advocate for pothead and ginger rights. She has been spitting rhymes since she was a kid, started DJing at 16 and the rest is history. From DJing at illegal raves, to rap battling around the country and ending up as an illegal immigrant for a year in South America. Sig’s been on a mad adventure and has finally got her shit together enough to try and tell the tale. #SigSadWorld

Cul De Sac and Leanin’crew member Truce is an energetic MC with tireless work ethic and a real appreciation for his peers and the wider scene. With a new concept album in the works, we should hear some exclusive previews at this show…. if we’re lucky

4pm – 8pm: A family friendly session in the bar.
8pm – late: Clubnight in the main venue. 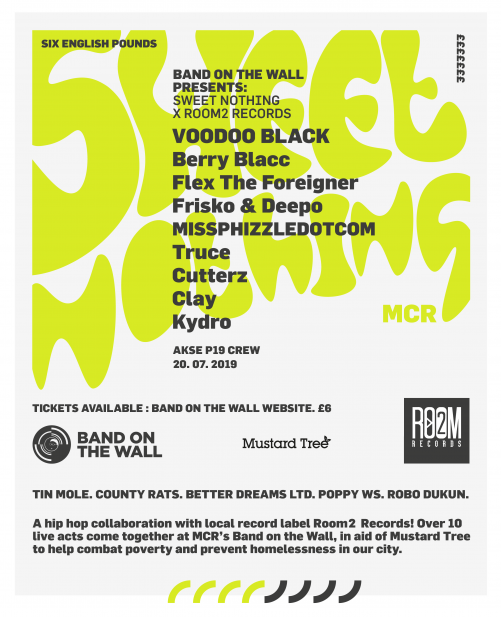