Mark Reeder (born 5 January 1958) grew up in Manchester, England. He is a musician, record producer, remixer and film maker.

Before moving to Germany in the late 70s, he co-founded new wave band “The Frantic Elevators” together with Neil Moss and Mick Hucknall (Simply Red). Reeder has been living and working in Berlin since 1978. In 1981 he formed the darkwave synth bands “Die Unbekannten” and in 1984 “Shark Vegas”. He also co-managed all-girl avant-garde group Malaria!together with Jochen Hulder. He was the live sound engineer for Malaria!and Die Toten Hosenand on a couple of occasions Einstuerzende Neubauten.

He is also the founder and owner of the first East German electronic music label “MFS (Masterminded For Success)” which he started in 1990, after producing the last album of communist East Germany – “Torture” by Die Vision, in late 1989 for state-owned label AMIGA. http://daily.redbullmusicacademy.com/2013/09/die-vision-last-album-in-east-berlin.

MFS helped launch the careers of many, now famous artists such as Cosmic Baby (Harald Bluechel), Dr Motte, Effective Force (Johnny Klimek), Ellen Allien, or Mijk van Dijk. In February 1992 MFS released the world’s first Trance compilation (Tranceformed from Beyond). Many of these MFS artists were also to feature on the first Tresorrecords compilation.

He’s composed music for a selection of films and advertisements (in the UK) including the music score for Joerg Buttgereits controversial film “Nekromantik 2” as well as his theatre play “Captain Berlin vs Hitler” (2008) and for his own 2015 documentary film about 80’s West-Berlin music scene “B-Movie (Lust & Sound in West-Berlin)and the French cold war thriller Wolf’s Call(2019).

His latest album release “Mauerstadt” in late December 2017, features his song-writing, production and musical collaborations with Manchester legends New Order and The Inspiral Carpets, as well as with The KVB, Maja Pierro, Queen of Hearts, and Ekkoes.

Today, he is a highly sought-after producer and remixer, but also as a lecturer, due to his valuable first-hand experience and understanding of the Berlin music scene from the 80s up until the present day and his experiences in East and West Berlin during the 1980s and 90s up to the present day.

Jon Savage is the author of England’s Dreaming: Sex Pistols and Punk Rock, Teenage: The Creation of Youth 1875-1945, 1966: The Year the Decade Exploded, and This Searing Light: The Oral History of Joy Division. In late October 1977, he was a key contributor to Sounds’ two New Musick issues, which mapped out the Electronic Future.

John Foxx was first known as the original lead singer with Ultravox! Formed in 1976 out of the ashes of various projects Ultravox! went on to produce three albums and a string of singles before John left in 1979 to pursue a solo career. Almost immediately he signed to Virgin, a partnership which yielded hit singles ‘Underpass’, No One Driving’ and ‘Burning Car’. The album ‘Metamatic’ was released in January 1980 and reached number 18 in the album charts. In recent years John has formed the critically acclaimed John Foxx And The Maths with analogue synthesiser maestro Benge and featuring Hannah Peel and Serafina Steer. He’s also released pioneering collaborative recordings with the likes of Harold Budd, Matthew Dear, the Ghost Box label, Robin Guthrie from the Cocteau Twins, had international exhibitions of his art and design work, as well as writing a series of short stories entitled The Quiet Man, which are due to be published later this year. 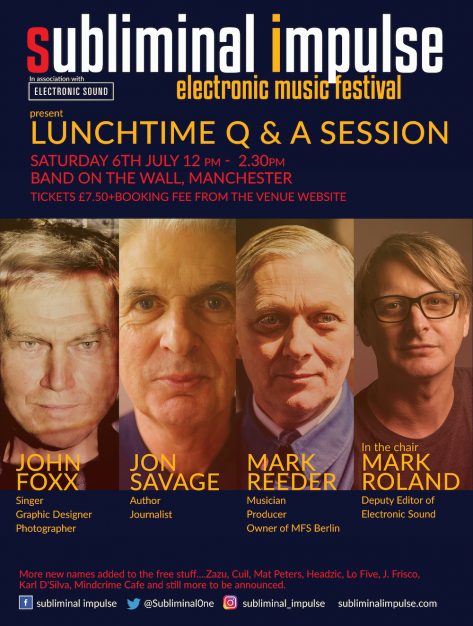