Pathaan is one of the very few UK based DJ’s to have truly crossed the dance world divide. His unique and highly absorbing ‘Stoned Asia Music’ series of compilations reflects a personal passion for global chill-out with a sitar twist. A growing musical diversity had led to the release of Pathaan’s ‘Small World, Indian Sunset and Global Sunset compilations, showcasing the open-minded attitude of his club nights combined with an obsession for seeking out the very latest global platters.

Their music is usually described as Transglobal Breakbeat Dub Science as it contains elements of many genres: breakbeat, dub, dubstep, drumstep, triphop, drum and bass, Indian, Arabian and Turkish musics and many more. They are a small collective, based across the UK but with main recording facilities in Croydon, South London.

Artist ,songwriter and producer from Manchester, NonChalant has a unique sound which resonates with depth and a quality which transcends across many musical styles and genres. Nonchalant is a regular and popular artist played by BBC Asian Network’s Bobby Friction and has gained the respect and attention from the commited listeners of the BBC radio channel. The Nonchalant is currently working on a new music project with an eclectic collection of tracks with a futuristic /world fusion sound twisted with an asian and arabic flavour under the banner of Cafe Manchester which represents all the beautiful colours and textures of the ever changing cosmopolitan city of Manchester.

Drumscapes produces spectacular electro-tabla live sampling performances with all instruments played, sampled and processed on stage. Fusing Indian tabla with Middle Eastern & West African traditions its like nothing you’ve heard on the dancefloor before.

Female Jungle, Drum and Bass and Ragga DJ & producer best known as the founder of Sub-Woofah and spin off The Jungle Takeover club nights run throughout Manchester, Leeds and London. Runner up in the Skiddle DJ of the year competition in 2010, she has warmed up the stage for some of the biggest players in the game, holding numerous residencies and playing at some of the bests clubs in the country and festivals throughout the UK!

This event will begin at 9pm but our Picturehouse Cafe Bar is open from 7pm for good times. 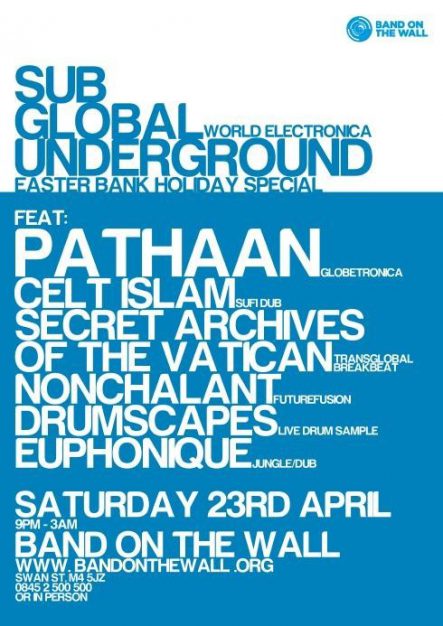