Jazz titan and frontrunner of the potent London jazz scene Shabaka Hutchings brings his group Sons of Kemet on tour after the release of their critically acclaimed album Your Queen Is A Reptile.
Sons of Kemet features the iconoclastic mix of Shabaka Hutchings on tenor sax and Theon Cross on tuba, with Tom Skinner and Eddie Hick on double drums. On this third studio album, they bring a genre defying approach that celebrates the restless exploration of identity within the Caribbean diaspora within the U.K. Your Queen is a Reptile was recorded in London with a host of guests spanning the breadth of the U.K. scene including jungle legend Congo Natty and poet Joshua Idehen. Sonically, this album stretches from New Orleans to the Caribbean to London to the Middle East, and incorporates spoken word, rap and elements of dub, further emphasising jazz’s place in today’s hip-hop world.
Your Queen Is A Reptile addresses the British Monarchy, rejecting the notion that some are born better and the idolatry of the British Queen. Instead, Hutchings presents an alternative: his own Queens. Each track on this album celebrates a different Queen, claiming “Our Queens led by action, by example, our Queens listened. Our Queens made bright futures out of cruel and unfair pasts.”.

This is a standing show. Presented by Bam!Bam!Bam! and Now Wave. 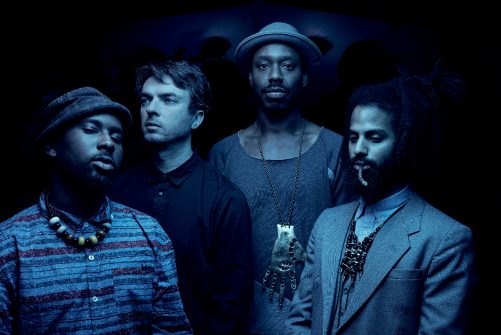