Sometimes we come across a band who we feel you just have to see, so we run the “Band on the Wall recommends” series; inviting you to catch the newest bands who are on our tip list, for free!

Influenced by groups such as the Cinematic Orchestra and Bonobo, Slowly Rolling Camera bring an eclectic sound containing elements of trip-hop and jazz, powerful vocals and intricate drum and bass rhythms. We think they’re quite special.

Slowly Rolling Camera is the new project that teams up pianist-composer Dave Stapleton, producer Deri Roberts, vocalist-lyricist Dionne Bennett and drummer Elliot Bennett. The debut self-titled LP, set for release early 2014 on Edition Records, is produced by Andy Allan who has previously worked alongside Portishead and Massive Attack. The group describe themselves as “music that has distinct echoes of the invisible soundtracks of UK progressives Cinematic Orchestra and Portishead.”

The live ensemble is made up of 7 members, who have known each other for over 10 years from playing in various funk & soul groups in their hometown of Cardiff before forming Slowly Moving Camera in 2012. We cannot wait to see these guys, who will undoubtedly bring the vibe to Band on the Wall. For free! 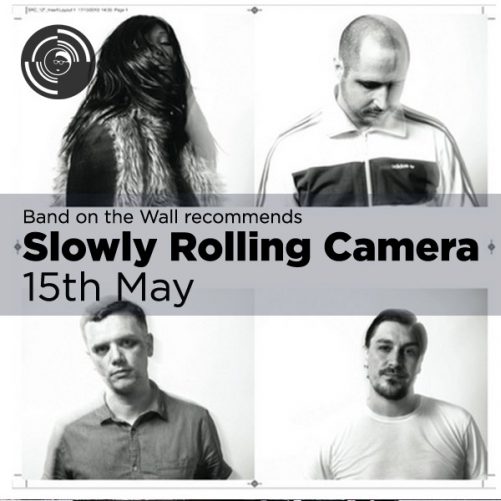