TICKETS AVAILABLE ON THE DOOR.

Since their early years, The Red Eye Hifi crew have been throwing some of Manchester’s maddest parties. Spanning a wide range of underground sounds their clubnight has been held at most of Manchester’s premier venues and is now part of the furniture in the rainy city. Now based at Band on the Wall, the crew are bringing you carnival flavours from Dancehall to Soca to Afrobeats plus a good helping of UK bass music in the form of Grime, Jungle and Funky played by some of the most sought after DJs in the country! Dancers, decor and Caribbean food complete the carnival atmosphere so bring your whistles and horns and join them in the shubz!

Hailing from London, The Busy Twist is a collective focused on rejoining the dots between Afro, Latin and UK Bass music by developing a sound which not only melds the sonic genealogy of all three palettes but also presents such crossovers faithfully. Their debut EP ‘Friday Night’ with Soundway Records is preoccupied with the ever-decreasing gap between London and Ghanian music in an effort to capture the vibrancy and warmth shared by both cultures.

Beyond the banks of West Africa a resonance with Columbian roots is increasingly present in their music – a link they have developed over a series of trips to the country in recent years, and furthered by productions alongside locals Nidia Gongora and Chongo de Colombia. The group continue to commission remix work for Palenque Records, Systema Solar and Ghetto Kumbé, and with a slew of original releases scheduled for 2017 there is no doubt you will catch The Busy Twist raising temperatures on dance floors worldwide in the not so distant future. 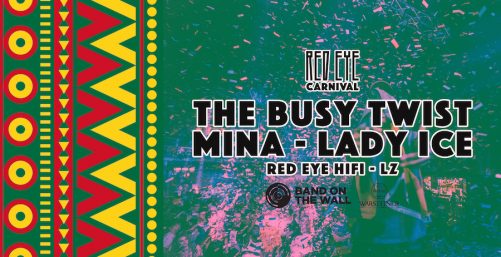