During a distinguished career spanning over four decades, Paul McCandless has brought the soaring lyricism in his playing and composing to the ensemble sound of two seminal iconic bands of jazz: the original Paul Winter Consort and the relentlessly innovative quartet, OREGON.

Born in 1947 in Indiana, Pennsylvania, and a gifted multi-instrumentalist and composer, Paul specialises in the oboe, English horn, bass clarinet, soprano and sopranino saxophones and a collection of folk flutes reflecting his grounding in both classical and jazz disciplines. Trained at the Manhattan School of Music, he was a finalist in the 1971 English horn auditions for the New York Philharmonic. Today, he says he’s lucky not to have won those auditions, because a victory would have pulled him into the world of full-time classical performing, and he would have missed out on the rich life he’s had in jazz.

Paul’s compositions have been featured in a number of film scores. Most notably, he wrote music for the video Squanto and the First Thanksgiving, a Rabbit Ears Production, with Graham Greene as narrator. Three of Paul’s orchestral scores are heard on a CD called “Oregon in Moscow”, featuring OREGON and the Moscow Tchaikovsky Orchestra. 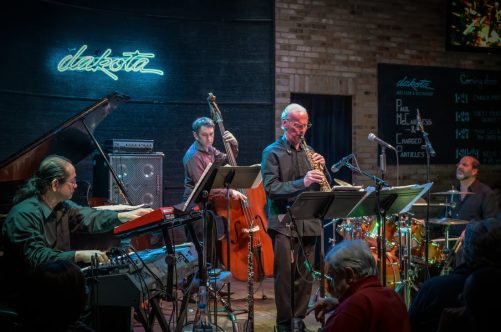