Orkesta Mendoza’s mix of cumbia, mambo, indie and tex-mex psychedelia – all in well-cut suits – comes to Manchester! Their brash, widescreen style and witty reference to 60s instrumental pop is both effortlessly classy and enormous fun. The band is led by Mexican-American kingpin Sergio Mendoza, who is also a member and co-producer of Southwestern music legends Calexico, and arranger and founder member of Mexrrissey.

Blending cumbia and mambo with psychedelic rock, polka, country and electronica, Orkesta Mendoza imagines what Mendoza’s home town of Nogales, on the US-Mexico border, would sound like if this divide didn’t exist. On their new album, ¡Vamos a Guarachar! (“Let’s Dance!”), spirits run high. Effervescent horns in “Cumbia Volcadora” make for a bold, brassy stomp. Bristling with guitar riffs, “Caramelos” swaggers and struts. And dressed in their uniform of black suits and sunglasses, the band look like nothing so much as the Blues Brothers playing at a Day of the Dead party.

Sergio Mendoza grew up listening to the Mexican regional styles jostling for headspace in a young, music-mad mind – cumbia mainly, but mambo, rancheras and mariachi too. The border is always a fierce arena of exchange, both commercial and cultural, and so there was American music too. At one point ‘rock and roll, the classics’, as Mendoza himself deadpans, seemed to win out and he stopped playing those ‘Latin styles’ for a good decade and a half.

“Sergio Mendoza is one of the great innovators of the Arizona music scene. A brash, widescreen style that would have impressed Phil Spector … there is impressive variety in his exuberant approach. Classy and enormous fun.” **** – The Guardian 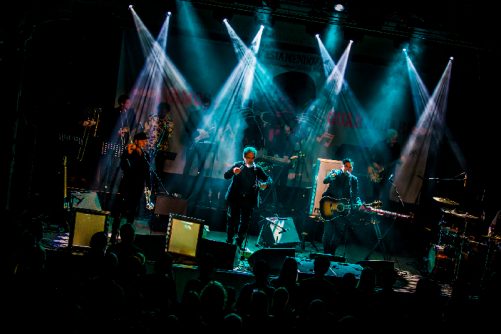