Craig Charles can’t make this month’s so we’re making it a FREE ENTRY NIGHT with the Australia’s hottest deep funk band live plus the nation’s finest funk and soul  DJs Steve Cato (Different Strokes / Soul or Nothing) and Jonny Shire (Funk & Soul Club Resident DJ) manning the decks ’till the early hours. Expect exactly the same friendly vibe as every month but all for free folks. Craig will be back in July!!

Get Your Free Tickets By Clicking Here Now!

Deep Street Soul are most definitely in the deep funk mix and sounding bone deep. Crunchy as a nut salad and crispier than peking duck, the fatback beats keep rolling on in with the surf for this amazing band. Checkout their funkier than thou cover of MC5s Kick Out The Jams and you’ll see exactly what we mean and they’re sensational live. And if that ain’t enough we are lining up the DJs who will be keeping your butts n booty shakin’ on into the night until 3am. Get those tickets early and see you at the front

“DSS are slamming, & make you wanna get up and dance” Phil Gates (funkalicious.com)

After being involved as a youngster in the Northern Soul scene, Steve Cato started to dj soul in bars around Huddersfield early 80s before moving to Manchester in 1988 and has been a dj and promoter in the city ever since. He’s also played all around the uk plus USA/ Australia/ Spain/ Sweden/ Norway/ Italy/ Ireland/ France etc. His rare soul events go under the name of Soul Or Nothing and he co promotes a monthly night in Manchester called Different Strokes where guest djs from all over Europe and around the uk perform. Band on the Wall is delighted to have Steve as very special guest DJ at this month’s funk and soul club gathering.

Please note this event is strictly over 18s only

Get Your Free Tickets By Clicking Here Now! 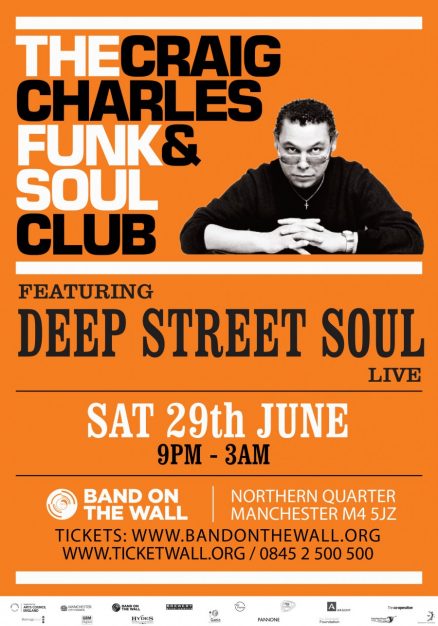