PPL!!! It’s been a loonng time coming but Saturday 17th August 2019 sees this special one-off return of Manchester’s most missed Reggae club night – the legendary Night of the Living Dread!! For this one, Mikey D.O.N has lined up an event that most Reggae and Dancehall fans crave for and would love to witness – a dance called ‘90’s SPLASH’. It is with great honour and privilege that he’s welcoming two iconic and legendary artists of 90’s dancehall to Manchester for their very first time! It was 1994 that these two artists last visited the UK and they played in London with Snoop Dogg. Twenty five years later and still smashing the circuit MEGA BANTON along with longtime associate and DJ partner RICKY GENERAL are coming to Band on the Wall to grace the stage. The night will be hosted by Dancehall artist TAHZ out of GlenDevon Records & Caribbean Gold Group stable. As usual with the NotLD theme, come prepared to fulljoy the party vibes, dance ya socks off and get sweaty. To mark the occasion, the person wearing the best 90’s outfit gets a bottle of fizz!!!

Also on the night we have Manchester’s DOCTOR C (Dancehall Surgery) in the house selecting more tunes from this golden era!!!

Spread the word people because it’s gonna be a TIIIING!! Night of the Living Dread is RETURNING for ONE NIGHT ONLY and this is definitely gonna be a night NOT TO BE MISSED!!!! 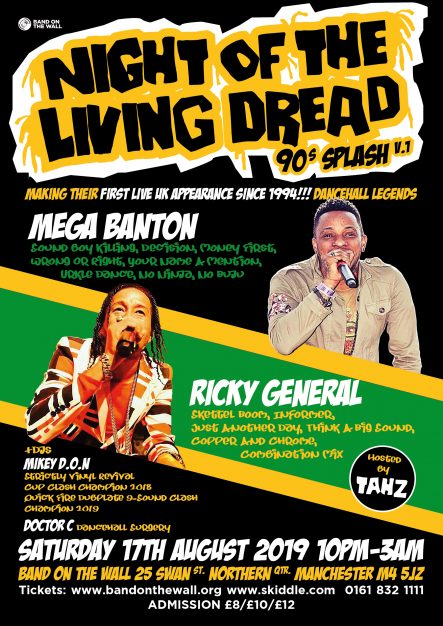