Nev Cottee is back with fourth solo album… ‘After all these years it feels like I finally know what I’m doing. For some reason I had this image of the River’s Edge in my head – a promised land where I wanted to be.’

The album oozes with confidence as Nev takes his low barritone vocal into new areas and – dare we say it – even breaks into song!

The dream-like Waitsian lullaby ‘Nightingale’ opens the record, perfectly setting the scene. Lee Hazlewood inspired doomed love duet ‘Roses” follows featuring the mysterious Veronica – a Nicoesque chanteuse Nev discovered singing in the backstreets of Madrid. ‘The minute I heard her voice I knew she was perfect. She has an ethereal quality. Not of this world’.

The classic songwriting continues with lush soundscape production once again provided by the great Mason Neely (Wilco/Edwyn Collins). Long time friends contributing their unique skills include legendary guitarist Nick McCabe (The Verve), pedal steel virtuoso Chris Hillman (Ethan Johns/Billy Bragg) & James Walbourne (The Pretenders/The Rails) to name but a few. Cellos and violins combine with vintage synths to create Nev’s now familiar sonic landscape. ‘To have Nick contributing was a real honour. The guy is THE guitarist of his generation. Not many musicians have their own unique sound but Nick does.’

Inspired by the late Scott Walker, Neil Young and the aforementioned Waits, River’s Edge is a unique sounding record blending beautifully crafted songs with the cinema scope production values of Spiritualized and Morricone. It’s a nod to the mythical Canyons of LA but through a very English lens. ‘There is a pastoral quality to the songs on this album ‘Local Hero’, ‘Hello Stranger’, ‘Scattered Leaves’ they’re all about the hidden places I love discovering in the English countryside.’

Describing the recording process Nev explains, ‘For this album we met up in Manchester for 2 weeks and got it all down. We just went at it workman-like from 9-5 every day. I love the whole process – writing, demoing at home, the studio. It’s very gratifying to see an idea come to full fruition.’

‘I want to be unlike anything else out there at the moment. I don’t see anyone doing what I do. I’m on my
own. Good.’

So where is The River’s Edge…?! ‘The songs are my way of working out what’s going on in the world. Finding some sense in all the crazy madness. I hope people can come and join me in this special place and find some repose.’ 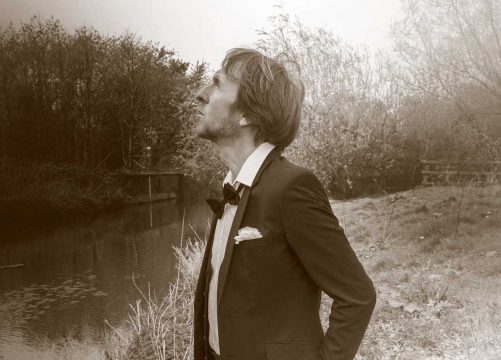