For this special concert in the Barbirolli Room at the Bridgewater Hall, two of the most remarkable woodwind instruments – the Bansuri Flute and Shenai – combine to take the audience on a melodic journey through both the Hindustani and Carnatic genres of music.

Flautist Jayanth is one of the rising stars on the Carnatic music scene. A prodigy, Jayanth was driven from a young age by natural talent talent and enthusiasm for the bamboo flute. As one of the most sought after flautists in carnatic music, he was, from the age of 5, naturally drawn into the tutelage of his grandfather, noted flautist, the late T. S. Sankaran (prime disciple of Flute Mali) in a traditional guru-sishya parampara.

Jayanth has a refined technique which enables him to switch over to the bass and double bass flutes with ease to cover lower octaves, which is acclaimed as a hallmark in his recitals. His spontaneity, perfect pitching coupled with expressive and bhava laden rendering has won him appreciation from fellow artists and music connoisseurs. Jayanth has toured extensively all over the world and has accompanied some of the biggest names in music, such as Padma Vibhushan Umayalpuram K.Sivaraman, Late Sri Vellore Ramabhadran and Padma Bhushan Sri T.V.Gopalakrishnan.

Jayanth is joined for this special Jugalbandhi concert by Ashwani Shankar, a Shehnai master. The shehnai is a beautiful and rare woodwind instrument, similar to an oboe, making it a perfect accompaniment to Jayanth’s Bansuri flute. Ashwani comes from a musicially prestigious family and has been learning the shehnai from his father, Pandit Daya Shankar, from a young age. Ashwani has performed across the globe, usually with his brother, Sanjeev, who is also a shehnai player.

Providing the rhythmic heartbeat to this melodic masterpiece are celebrated Mridangam exponent Neyveli Venkatesh and world-renowned Tabla artist Kousic Sen. Both accompanists are known on the international stage as masters of rhythm and their skill gives new depth and excitement to the traditional concert experience.

Presented by Music for Mind and Soul. 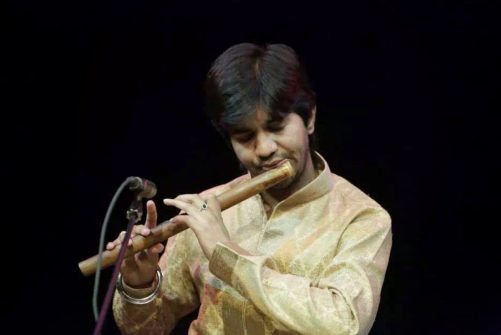