Band on the Wall is delighted to present an incredibly rare Manchester concert by the internationally-revered Ethiopian composer, vibraphonist and inventor of Ethio-Jazz, Mulatu Astatke.

Astatke’s music is utterly unique with his signature vibraphone style using the distinctive five-note Ethiopian scale that, drawing on so many musical influences, produces a mesmerising sound entirely his own that has earned him fans of every music genre. Indeed, Mulatu Astatke’s 1970’s ethio-jazz records are revered around the world by jazz, funk and African record collectors – some of them selling for in excess of £2,000 at auction. In 2005 Jim Jarmusch used his music as the backdrop for his film Broken Flowers, introducing Astatke to a wider audience. Nas and Damian Marley used one of his tracks as the soundbed for their recent As We Enter chart hit and he has also been sampled by other acts such as K’Naan. Following a recent acclaimed collaboration with The Heliocentrics, Mulatu Astatke visits Band on the Wall with a brand new band. Join us to delight in the ever shifting, forever fascinating music of this major international artist.

This event will begin at 8pm but our Picturehouse Cafe Bar is open from 5.30pm for delicious food and drinks. Special Offer! Book your meal in advance and get free ‘lucky dip’ tickets for a future concert – click here now for details 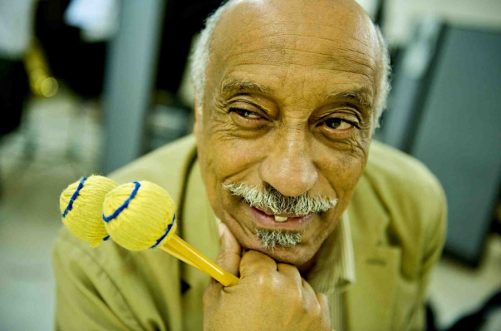