Live in the Dark is a brand new night that fuses together live artists and club culture into a jam-packed 4 hours drums, records, and all-sorts inbetween. For this first edition our very own MSC Big Band will be taking the headline slot, alongside the Northern Supergroup of amazing up-and-coming UK drummer/band-leader Emanuel J.Burton and famously folkloric Manchester selector Annabel Fraser (NTS). From start to finish this event promises to offer everything from the brash to the beautiful and is guaranteed to keep you attached to the dancefloor. Don’t live in the dark, be in the know and grab your tickets now!

MSC Big Band is bringing its massive 26 piece line-up to the stage for an entirely new set. Having built a strong following as a band that hold huge appeal to both clubbers and live-music lovers, for the first time MSC Big Band are stepping out into a world of their own music. For lovers of the classics, MSC’s huge arrangements of big tunes will still be present but now mixed with an ambitious, energetic and playful new music designed with club goers and gig lovers in mind. For lovers of Romare, Ezra Collective, Nubiyan Twist and many more this blending set of electro/afrobeat/hip-hop/jazz mixed in with some of your favourite tunes is not one to miss!

Travelling not too far from her musical homes of The White Hotel and NTS Radio, Annabel Fraser will be bringing her vast vinyl knowledge and deft dancefloor skill to close this show. A mainstay of the Manchester music scene, Annabel Fraser has spent years collecting a boundless array of tunes and honing her ability at challenging and governing the floor, making your feet move to musics you may have never heard before. Annabel Fraser is a perfect example of the efforts DJs go to in crafting a set, seamlessly mixing between disco, new-wave, punk, techno, jungle and everything in between. Definitely not one to miss, hearing one of Manchester’s finest selectors on one of Manchester’s finest systems is guaranteed to keep you on the dancefloor until the very end.

Emanuel J Burton will be bringing his Super Group, a carefully curated 7 piece Spiritual Jazz ensemble hailing from cities across the North. Their expression through music is powerful and driven by faith, feel and technique in equal combination. Bringing a fresh and experimental stance they access the future sound of Jazz with the perfect seasoning of Gospel and Funk through to Soul and Jazz Fusion. Originating from the vision of band leader and drummer Emanuel J Burton, this fierce collective look for each performance to bring a musical therapy and within that invoking positive and healing vibrations. Their complimentary skills delivering a wave of amped but tight interplay. They are the perfect outfit to warm your souls for the night ahead, make sure you get down from the off to experience this.

Over the last 3 years, London-born musician and DJ Dame has been honing his craft in Manchester, using his connects within the city’s live music scene as a major source of influence for his time on the ones and twos. The selector’s acute ear for everything tasty has lead to a number of appearances in and around the city alongside acts such as Mr. Scruff, Max Graef and his now formed residency at MSC Big Band, as well as a number of shows on radio stations such as Reform and Limbo. With an uncanny ability to spin soul out of anything, he’s sure to see you find your groove on the floor. Rest assured, you’ll be in safe hands. 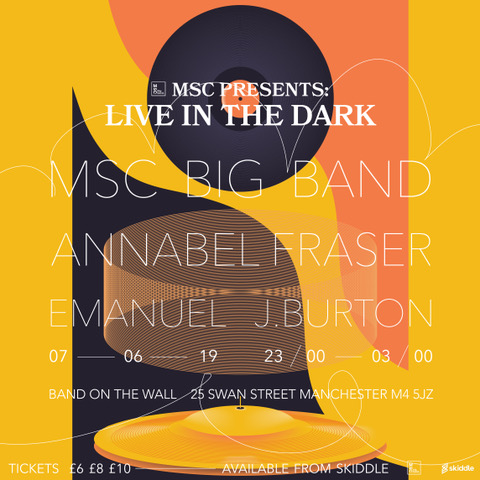