First of two massive nights as Band on the Wall presents one of the true giants of reggae music live in Manchester. Grammy-winning reggae Icon Lee ‘Scratch’ Perry’s name has become synonymous with experimentation and innovation both as a legendary producer and influential performer. After over 40 years, “The Upsetter” shows no signs of slowing down any time soon. Following his phenomenal performance at last summer’s All Tomorrow’s Parties, he visits Band on the Wall with full live band and firing on all cylinders.

Lee ‘Scratch’ Perry is one of the most important figures in the history of reggae music. As an artist, songwriter, innovator, performer, creator and especially a producer, Perry has been at the forefront of reggae music since the late 50’s ska movement. Cited by many as the inventor of dub reggae and the “scratch” turntable effect since used by DJ’s everywhere. He was also a seminal influence on the works of Bob Marley and shaped the machinery that became his celebrated sound. Perry’s studio innovations made him such a sought after producer that he influenced not only reggae but also rock, punk, pop and dance music. Having collaborated with such icons as The Clash on Complete Control, Junior Murvin on Police and Thieves and The Beastie Boys on Dr. Lee PhD for their 1998 hit Hello Nasty. Now back and with his unique sound stylings burning as brightly as ever, get ready and tighten up for one of biggest nights of the year.DJ tonight is Mikey Don.

Tickets will fly for this one so advance booking strongly recommended for what promises to be one of the concerts of the year.

Lee ‘Scratch’ Perry is also playing at Band on the Wall on Wednesday, 1st Feb.

This event starts at 8pm but our Picturehouse cafe bar is open earlier for food and drinks. 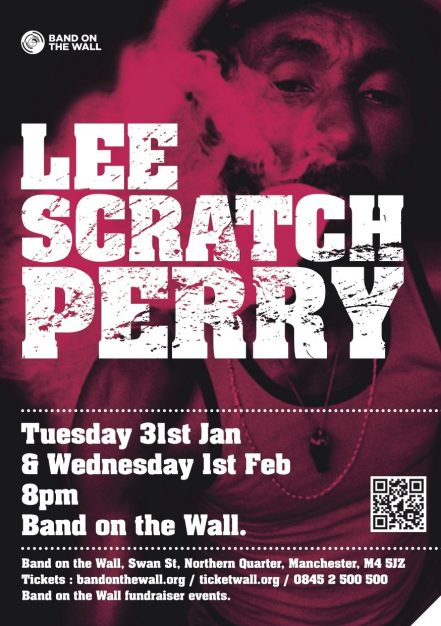