Formerly known as Lynched, Lankum are one of the most talked about bands to come out of Ireland in decades. They are a Dublin four-piece who combine distinctive four-part vocal harmonies with arrangements of uilleann pipes, concertina, accordion, fiddle and guitar, whose repertoire spans humorous Dublin music-hall ditties and street-songs, classic ballads from the Traveller tradition, traditional Irish and American dance tunes, and their own original material.

The band comprises of brothers Ian and Daragh Lynch along with Cormac MacDiarmada and Radie Peat. When not on tour Ian lectures in Irish folklore and musical traditions in University College Dublin, while Cormac and Radie grew up as champion traditional players, on the fiddle and concertina, respectively. Yet Lankum are not purely trad themselves, in the same way The Pogues were more urban music. Rough-hewn and raw, they are the most exciting group in Dublin right now.

The band was originally formed by brothers Ian and Daragh Lynch in the early 2000’s, and has since progressed through a number of incarnations, culminating in the four-piece group playing today. The release of their album ‘Cold Old Fire’ and a subsequent appearance on Later… with Jools Holland cemented their reputation as a band that successfully crosses genres. Although an acoustic group whose repertoire is fundamentally based on traditional song, influenced by legends such as Frank Harte, Planxty, The Dubliners and the Watersons, subtle traces of the group’s collective influences can be detected, ranging from American old-timey music to krautrock and drone. Lankum are busy breathing new life into old music.

“There is folk that wants to whisper in your ear, and then there is the music of Lankum: urgent, desperate and detonating, full of lyrics and sounds smacking together like waves shattering stones in a storm” – 5/5 The Guardian

“Lankum are the darlings of Dublin’s 300 year-old folk scene.” – The Guardian

“Now, here’s more of their fresh perspective on traditional material a band that goes for complete immersion in the music. Between The Earth And Sky is an absolute feast, full of raw passion, grit and plenty of attitude.” – RnR Magazine 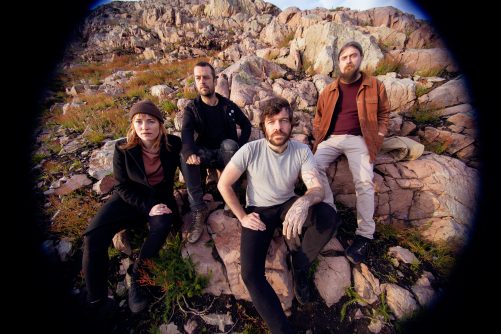