In the spring of 2018, the band completed their first sold-out European tour – which saw over 800 attending their second ever show in Brussels – KOKOKO! Took their electrifying live show across 19 dates in Europe last autumn. Throughout October and November, they played the likes of Amsterdam Dance Event, Milan’s Linecheck Festival, and headlined their own residency at the 25th London Jazz Festival. 2018 sees them completing another hectic summer with performances at Roskilde, Sonar, Dour, We Love Green, Lente Kabinet, Down The Rabbit Hole and many more. Crowd surfing and encores accompanied the rave reviews as they were constantly referred to as the band to have watched.

Moving into 2019, the band embark on another epic tour which also includes them taking their first footsteps on American soil. This being highlighted by playing none other than the world renowned SXSW festival in Austin, accompanied by other shows in New York (Baby’s All Right), Los Angeles (Moroccan Lounge), San Francisco (Public Works) and five gigs and the infamous SXSW Festival in Austin. The tour sees them also play in Denmark, Switzerland, Belgium and Germany before the busy summer schedule is upon them once again.

KOKOKO! now have 4 releases in the public mainstream and have collaborated with other African artists on remixes and music. The latest of which being the band’s debut album ‘Fongola’, released on Transgressive Records to critical acclaim. 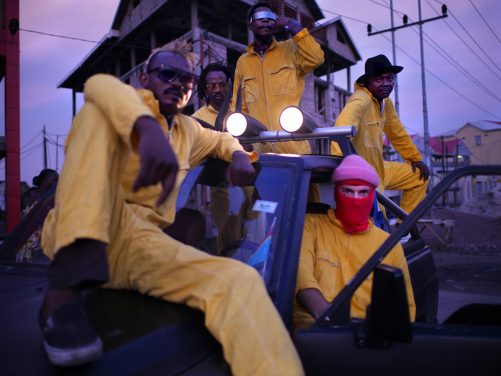