“A boundary-trampling high-octane hybrid in which the lightning fast electrified licks of Kouyate are matched by the explosive energy of Driscoll’s rapid fire rhyming.” – Songlines

“A gloriously accessible collision of styles. It’s an unlikely collaboration that works, magnificently.” – The Guardian

The well-worn and often overblown expression “music is a common language” has never been more apropos in the case of Joe Driscoll & Sekou Kouyate. US-born, England-based Driscoll speaks no French and Kouyate, who hails from the West African country of Guinea, little English. When they were brought together at the Nuit Metis (Mixed Night) festival in Marseille, France in 2010 and given a week to produce a concert, music was the only way they could communicate.

It turns out, they had a lot to “talk” about, and their first meeting sparked a collaboration that led to the formation of a band, the recording of an album, over 120 concert dates across Europe and rave reviews. Driscoll contributes the rapping, looping, beatboxing and songwriting talents he developed growing up in Syracuse, New York and during his own successful recording career. Kouyate, already a phenomenon in African music circles, has blown minds and ears with his hypersonic electrified riffs on the kora, bringing the exalted West African harp into the 21stCentury with use of distortion peddles, effects and previously-unimagined technical prowess. Together, Driscoll and Kouyate blend hip-hop, spoken word, funk, and soulful, accessible rock with Afrobeat, reggae and irrepressible African grooves. 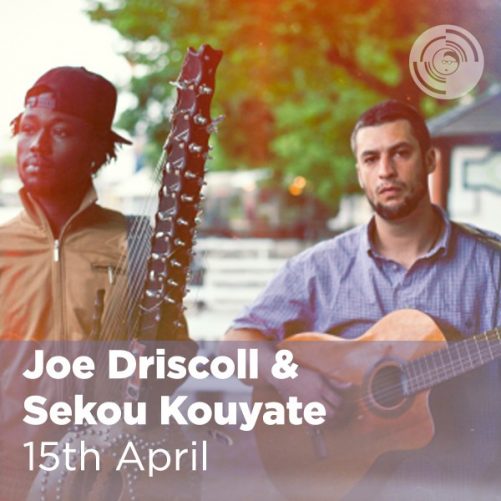