Justin McKenzie – Artistic Director/CEO, Jazz Re:Freshed
Jazz Re:Freshed is at the heart of London’s current jazz explosion. It has grown from delivering a nightly event in Notting Hill to organising a yearly festival, developing new artists, creating a record label and much more. Justin will tell us how it happened.

Paul Bradshaw – Founder, Straight no Chaser
As his legendary and influential publication reaches its 100 edition, Paul will share the Chaser story.

Kevin Appleby – Strategic and Creative Lead, Jazz South
Following a substantial grant award from Arts Council England, the project is about to launch a talent and leadership programme and a multi-layered programme of projects.

Simon Webbon – Head of Marketing and Communications, Band on the Wall
Simon Webbon is a communications strategist and project manager for the music, cultural and events sectors. Simon is Head of Marketing and Communications at Band on the Wall and has previously worked on a wide range of collaborative projects with the British Council, Arts Council England, Nesta, the European Commission, Guardian/Observer, Manchester Metropolitan University, London 2012 Cultural Olympiad and UK/Russia Year of Culture.

David Murray and Saul Williams
In advance of what promises to be a stunning show at Band on the Wall, David and Saul will talk about their work.

Concert: David Murray and Saul Williams, 7.30pm
Few musicians in jazz history have proven more vigorously productive than David Murray. With his band, comprised of drummer Nasheet Waits, pianist Jason Moran and Orrin Evans, bassist Jaribu Shahid, he invites the leading voice on the spoken-word scene. Together, they deliver an impassioned vibration, enlightened by the abrasive words of Saul Williams. 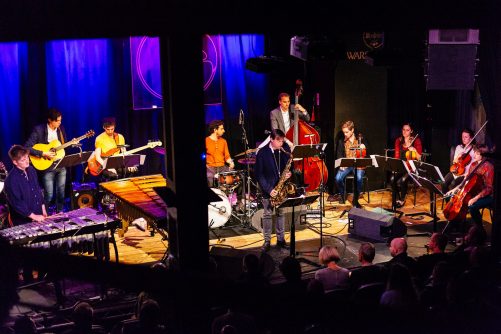