Somewhere deep in a silent suburb of Manchester, lies a hidden gem. Prima comes from a background steeped in musical heritage. The raw emotion, clever fusion of styles and fearless lack of boundaries is what really sets Prima apart from the crowd. RnB licks reminiscent of classic Mariah Carey, soaring vocals mixed with a distinctive twang of folk, all lay on top of a bed of distorted 808’s, trap style snare rolls and lush pads, this is a voice which instantly grabs you, and once it does… it won’t let go. Her latest EP “It Don’t Matter” will transport you to a wavy dimension evoking feelings of 90s RnB. Watch out for new releases soon!

Don Zulu fuses various musical styles to create what he dubs, “Sweet Rebel Sound”.
There’s sweetness in the soul influenced melodies that draw from different forms of jazz like high life and calypso. And there’s strength in the moving bass lines and disco influenced grooves, all topped with an almost ‘punk rock militancy’ and an afrocentric attitude.

Katbrownsugar is a musician/presenter from Manchester. Her music has been featured on BBC 1Xtra, BBC Introducing and more. She is about to release her 2nd EP “Pink Trees” produced by Manchester DnB heavyweights Nian Dub & Semiotix. Her sound is influenced by 90s RnB, Neo Soul and newer artists such as Tom Misch and FKJ. 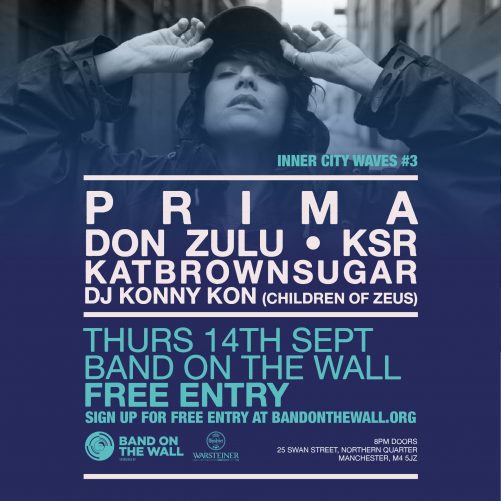