In 2015, Chris moved to Manchester and since his arrival he’s wasted no time. Over the last two years he has built the ‘Mr. Amor’ brand by hosting shows as part of the ‘Leanin’ collective and opened up for Asher Roth. Chris’ musical style is very unique with an old school feel, you can hear influences from Pharoahe Monch , Madlib and Slick Rick as he interlaces his multi-syllabic rhyming with hard hitting punchlines alongside a great story. His North- London dialect and lingo doesn’t go unnoticed and he gives you a real flavour of the streets when he raps as well as unveiling his own stories, personal experiences and his opinion.

Manchester MC, producer and alchemist Karmic Evolution started MCing parties at the age of 12, before going on to work with Broke’n’English, MC DRS and Konny Kon (Children of Zeus) to name a few.

Singer/songwriter rosebud is definitely one to watch. Her delicate RnB has won her praise from BBC Introducing Manchester earlier this year, just check out her acoustic rendition of ‘River I Run’ for an idea of her versatility.

KJ Topp writes, performs and produces slick, summery tracks that transcend funk, hip-hop and RnB. He uses guitars, samplers and synths to form his sound, check out his killer track ‘I’m Hearing Things’ to hear what he’s about. 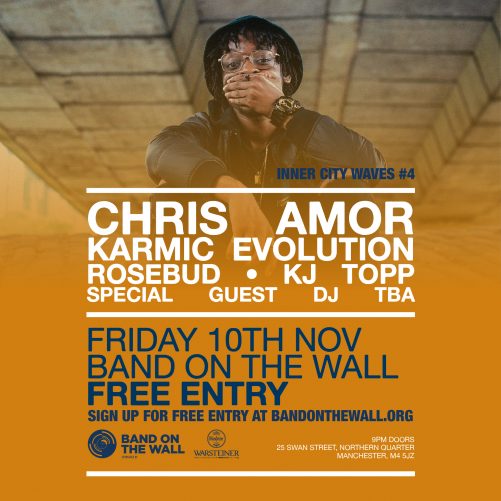