North London-based duo IDER perform at Band on the Wall on the back of the release of their hotly-anticipated debut album Emotional Education. The culmination of six years of intense creative collaboration between Megan Markwick and Lily Somerville, the record draws on themes of anxiety, identity, mental health, and the human condition throughout. The record’s euphoric, anthemic lead single ‘Wu Baby’ arrives alongside today’s news – a track first written with the elastic beats and drama of Kanye West’s Ye and Beyoncé’s Lemonade ringing in the duo’s ears. Emotional Education is now available to pre-order HERE with ‘Wu Baby’ among the singles.

Markwick and Somerville wrote every single lyric and note on Emotional Education themselves and the record was largely conceived over the last two years in the flat they share in north London with production added by MyRiot and Rodaidh McDonald (The xx, Sampha) in London and Los Angeles.

IDER have astounded with a string of stunningly original left-field pop and indie singles since first appearing with the sky-scraping, emotive ‘Sorry’ back in 2016. The pair have gone from strength to strength ever since; selling out all headline shows in their native London and up and down the U.K. whilst constantly adding to their growing fanbase across the world with performances across Europe and the United States, and even as far afield as the Philippines. To date, the duo have accumulated over 30,000,000 worldwide streams, including 9,000,000 on 2018 viral hit ‘You’ve Got Your Whole Life Ahead of You Baby’ alone.

The band have been awarded Tune of the Week twice at BBC Radio 1, landed on the BBC Introducing playlist at the station and earned the support of everyone from Annie Mac to Jack Saunders – who invited Megan and Lily in for a Maida Vale session earlier this year. IDER have drawn praise and more radio spins from Zane Lowe on Beats 1, and gained Lauren Laverne’s coveted seal of approval on BBC Radio 6 Music as well as multiple Evening & X-Posure playlists on Radio X. Their previous singles also won repeated accolades from broadsheet newspapers such as The Sunday Times (multiple Hottest Tracks), The Guardian (F&M playlists & Best of the month), The Observer (Hot Tracks & One to watch), The Telegraph (Best new music) and The Independent (Now Hear This). Online, the likes of Noisey, The FADER, Wonderland and Dazed have all showered the band with praise.

IDER’s intricately intertwined harmonies create a singular voice that ties the entirety of Emotional Education’s 11 songs together. Consistently intimate and influenced by a host of artists the multi-instrumentalist pair hold dear, the record is a coherent tapestry created all on their own – a rare find in a world where co-writing sessions are the rule rather than the exception. The album reflects not only the anxious uncertainty of being a young woman (‘YGYWLAOYB’), but empowering songs about sex (‘Brown Sugar’), feelings of nostalgia (‘Slide’) and the aftermath of broken relationships (‘Body Love’). It’s a raw, real record which comes from a uniquely personal place with their special friendship at the core of every track. With the announcement of Emotional Education, IDER’s deep emotional connection and unbreakable bond will only become clearer – and it’s sure to resonate with yet more hearts all over the world.

“Brooding, shimmering, soul-purging electropop magnificence from the London duo: ones to watch” The Sunday Times Culture 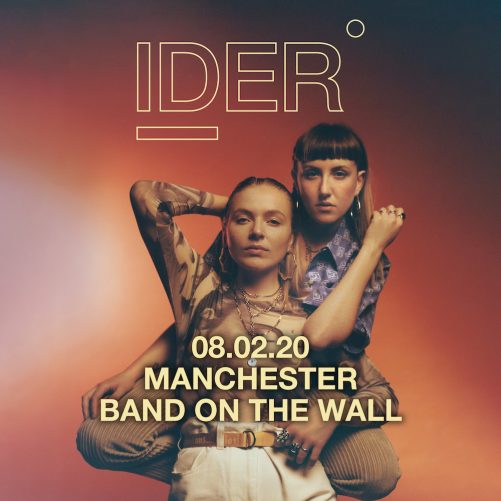