Straight from recording and performing on the latest Gorillaz album, Hypnotic Brass Ensemble are an eight-strong cohort of horn-playing brothers (plus one unrelated drummer) who take their stylistic cues from jazz, funk, hip-hop and strains of world music. They started out playing on the streets of America’s cities, selling their self-released CDs and gradually building a loyal following and an international profile.

The youngest of some 23 children, the brothers are the offspring of different mothers, but are all sons of jazz trumpeter and composer Kelan Phil Cohran (a member of Sun Ra’s Arkestra and co-founder of the Association for the Advancement of Creative Musicians).

While steeped in this prog jazz history they very much reflect today’s street music infusing imaginative jazz arrangements with a hip-hop/funksta sensibility. Incredible live and very, very cool – catch this amazing band on this rare visit to Manchester.

Support is from no less than the great rising Manchester star Denis Jones who wowed Band on the Wall audiences back in January with an incredible performance featuring his unique glitch-rich songs and growling, guttural and mesmerising voice. Unmissable.

This concert will begin at 8pm. 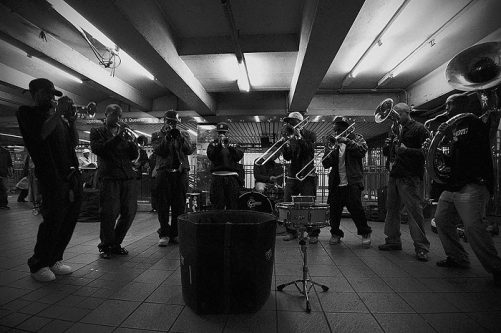