Hot 8 Brass Band are a Grammy-nominated New Orleans based brass band, whose sound draws on the traditional jazz heritage of New Orleans, alongside more modern styles including elements of funk, hip-hop, rap, and its local variation, “bounce.”

Transcending genres and trends, Hot 8 have performed and collaborated with artists from Lauryn Hill, Alice Russell, Mos Def to the Blind Boys of Alabama and George Ezra and have decade long affiliations with actor/BBC 6Music DJ Craig Charles, among others. They were nominated for a Grammy in 2013 for their second album ‘The Life and Times Of…’. and, with acclaimed releases such as ‘Vicennial…’, ‘On The Spot’ and ‘Take Cover’, continue to exemplify their ability to honour their city’s musical traditions while forging their own powerful legacy. Hot 8’s incredible tale, which comes across in their life-affirming music, has also previously featured in Spike Lee’s two New Orleans documentaries, When The Levees Broke and The Creek Don’t Rise, and David Simon’s HBO series Treme (in which the band played themselves), to add to extensive features across the world’s media.

Hot 8 Brass Band’s rhythms are loose-limbed and hard-hitting, with most tracks featuring a sousaphone prominently. The legendary group have established themselves as a dominant force on New Orleans streets—the band you want to dance behind during a Sunday second-line parade or witness jazz funeral. 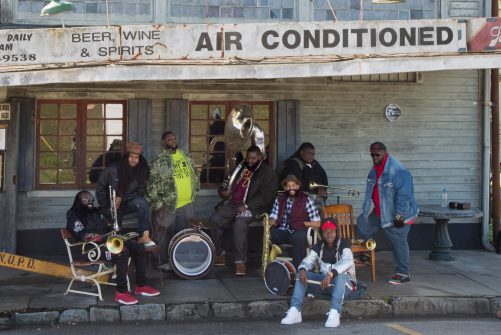