Harriet Tubman formed in 1998 when drummer J.T. Lewis, guitarist Brandon Ross and bassist Melvin Gibbs came together to start a band with meaning. Named after the heroic African-American slave who risked her life to escape from slavery and help more than 300 others to do the same, Harriet Tubman is deeply inspired by the ideals of freedom. The trio’s music – a fusion of soul, rock, jazz, and blues – examines the depths of these genres for their own unique liberated musical expression.

Mitch Myers of Amazon raves that Harriet Tubman is “a mind-melting display of inspired instrumental discourse between three very accomplished musicians… a power trio unlike any other.”

Integrating sampling and other digital methods into a compelling genre-defying sound, Harriet Tubman embraces the pioneering spirit of jazz. Re-contextualising musical technology to create innovative compositions is an important part of the African-American tradition, and the trio sees Harriet Tubman as their contribution to that tradition. Always looking to musical history for meaning and inspiration, Lewis, Ross and Gibbs present their music as a continuation of the musical innovation exhibited by such diverse artists as Ornette Coleman, Jimi Hendrix, Derrick May, Art Ensemble of Chicago and Parliament-Funkadelic.

On their place in the musical ‘gene’ scene the band notes, “we feel that our choice to perform Open Music has a value and relevance that connects with a re-awakening, a new search for revived meaning that we see and experience wherever and whenever we perform. Our music does not dictate through genre, or demographic, how one ‘should’ relate to it.” Not just musical philosophers, Lewis, Ross and Gibbs are hugely talented musicians. Music blog Bold as Love praises: “These three are consummate musicians who are at the top of their game. You can immediately tell when you are watching people who have mastered their craft: There’s an effortless responsiveness to the shifts in the music and to each other that say loud and clear that these people are doing something special.”

“This is black music at its best” – NPR

This is a cabaret seated show. 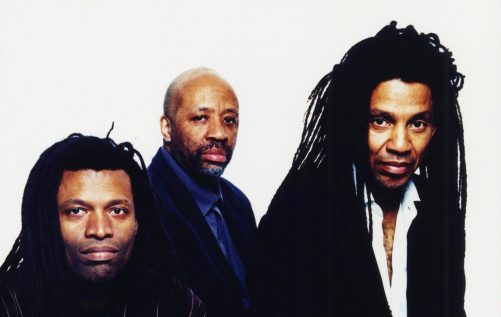