Following its huge success at Band on the Wall earlier this year, Greg Wilson’s Reels of Steel returns featuring a 3-hour set by the internationally-acclaimed DJ.

Reels of Steel is a feast of audio-visual action with Greg Wilson (Fabric, Back To Basics, Electric Chair, Ministry of Sound, Hacienda, Legend,). Having spent the last year digging through his extensive video archive to compile a show-reel of delights that will be projected to accompany his sounds, Greg will also be spinning cuts this time through two of his trusty Revox reel-to-reel tape machines and computer. Expect an eclectic assault on the senses while Greg Wilson keeps it reel on the decks until 3am. Guest DJ tonight is Stretch Disco’s Dan Soulsmith.

Check out Reels of Steel at Band on the Wall here! http://youtu.be/1GKbegFjkVA

Now available on my SoundCloud as exclusive content (which means you can’t see the waveform to stream/download unless you’re signed in). Details here:

This Sunday (Oct 2nd) at 9pm, when the featured album is Nirvana ‘Nevermind’. Info here:

This event will begin at 11pm but our Picturehouse Cafe Bar is open earlier for good times. 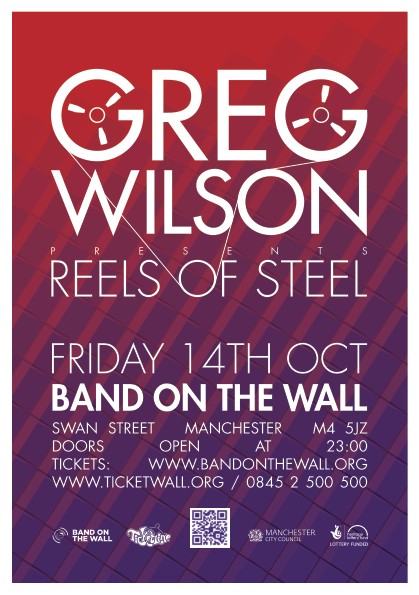