George Porter, Jr. is the legendary as the bassist, singer and co-founder New Orleans funk giants ‘The Meters’. 2014 Rock and Roll Hall of Fame nominees, The Meters are recognized as one of the progenitors of funk then called R&B, their music has been sampled by many artist and George continues to be recognised as a ‘godfather’ of the genre.

During the course of a career spanning more then four decades, Porter has not only made deep impression with his work in the Meters, but he’s collaborated with some of music’s most recognizable names, such as Paul McCartney, Patti LaBelle, Robbie Robertson, Tori Amos, Warren Haynes, John Scofield. Early in his career, Porter worked with seminal New Orleans artists like Allen Toussaint, Earl King, Lee Dorsey, and, Irma Thomas, to only name a few.

Porter is also the band leader of his own unique long term project the Runnin’ Pardners, well respected not only as a quintessential New Orleans band, the touring band continues to receive accolades on the funk and jam band scene. He has assembled some seasoned and talented musicians to join him on this project including Brint Anderson (guitar) and, Michael Lemmler (keyboards) and rising stars on the New Orleans music scene Khris Royal (saxophone) and Terrence Houston (drums).

Porter has proven to be capable of the ultimate fusion of funk and R&B rock and has gained recognition as one of the industry’s elite bass players. He continues to be not only an in demand performing artist but an accomplished studio musician and producer.

This is a rare UK show and the chance to see and hear a New Orleans funk legend. Expect new material and Meters classics to dance to or take in.

Support comes from the critically acclaimed Crowd Company. A modern take on vintage funk from 8 piece band Crowd Company Brimful of energy with a raw edge, catchy hooks/ melodies and tight groovy rhythms. Their new album is released in April 2014 and features appearances by Alan Evans from Soulive and Joe Tatton from The New Mastersounds. Alan Evans also mixed the album. The band evokes the spirit of 60s and early 70s funk as well as modern day funk jam bands whilst also focusing on strong soulful songwriting which combine funk with soul, blues and modern jazz.

“Melds funk with forward thinking Blues. If you’re partial to the loping musically tight backbeats of bands such as The Meters you’ll enjoy what’s on offer here” Guitarist magazine 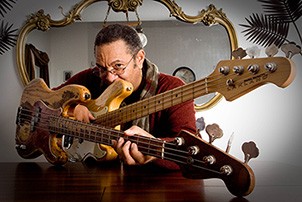