Self proclaimed grandson of reggae, UK heavy hitter, Gappy Ranks together with full live band, The Soul Rebel Band, brings his dancehall vibes to Band on the Wall in a rare Manchester show.

Recalling the ’90s and the heyday of British artists like Maxi Priest and Bitty Mclean, singer Gappy Ranks brings UK reggae to the world.Born Jacob Lee Williams, the London-based artist rose from a troubled past to become the beacon of  the British reggae industry. In 2009 he signed with Greensleeves, releasing his debut album for the label, Put The Stereo On, in 2010. The throwback effort was filled with nostalgia for the reggae of the ’60s, but his 2011 release, Thanks & Praise, he turned the vintage rhythms off for contemporary one-drop and dancehall with a sure R&B influence. Fast forward to now and his 2013 release, Shining Hope, continues to blend genres.
It’s a modern one drop reggae set with a pop edge that takes a middle path between the two records that came before.

With support from DJ Joey B and Mr Fox (Hot Milk).

This concert will begin at 20:30 but our Picturehouse Cafe Bar is open from 5:30pm for delicious food and drinks. 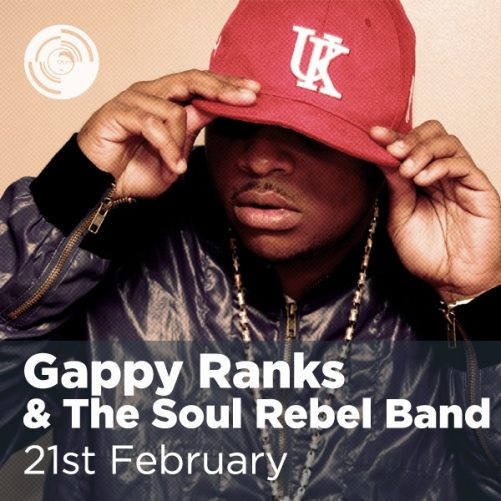