Band on the Wall presents a special edition of Free Vibes, curated by Amazing Radio’s new music champion Shell Zenner. We’ve teamed up with Shell to bring you four of the most exciting artists you need to know. Sign up for free entry and discover new music from the likes of False Advertising, Bleached Bones, Ill & Freakout Honey. DJ Shell Zenner will keep the vibes flowing ‘til late!

False Advertising
Born out of a desire to prove what is so vital about raw, energetic live music. Manchester based false advertising address modern discontent in their music, fusing sweetly snarling hooks with a cathartic hit of fuzz-guitar.

Musically, the trio carry echoes of underground ‘90s alternative grunge. Over time developing as much of a name for themselves as “the ultimate diy band” catching the attention of nme who recently featured them in their print edition as one of the uk’s leading unsigned acts and catapulting them to texas’s sxsw festival where they were chosen for diy’s much sought after british music embassy showcase.

Bleached Bones
Bleached Bones are an electronic group based in London, consisting of brothers Zan and Jon Crabbe who write and produce the music. Originally hailing from the steel city of Sheffield, they are influenced by a variety of electronic/dance artists including Wild Beasts, Jamie xx, Bjork and Massive Attack.

Ill
ILL is a genre-evading band which believes in the power of disobedient noise. With a repertoire of precarious pop songs and frequent improvised departures, ILL revel in the right to be weird, exploring the borders between the funny and the sinister, the personal and the political, the mundane and the surreal.

Freakout Honey
Freakout Honey made waves at Manchester Psych Fest earlier in the year and now they’re back with their fuzzy guitars, hypnotic riffs and spectacular visuals. Certainly one to watch. 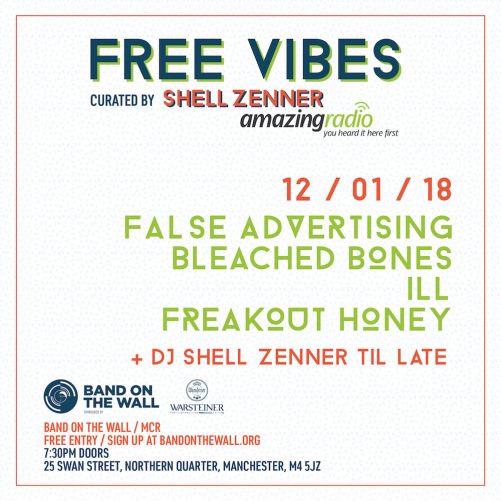