Band on the Wall presents a special edition of Free Vibes, curated with Amazing Radio’s new music champion Shell Zenner. We’ve teamed up with Shell to bring you four of the most exciting artists you need to know. Sign up for free entry and discover new music from the likes of The Goa Express, Dream English Kid, Electric Viper Club and Kyogen. DJ Shell Zenner will keep the vibes flowing ‘til late!

The Goa Express
Aged 16 and 17, The Goa Express have already cast aside middle of the road mediocrity. Searching the pantheon of the pure and the good, they have landed circa 1969, soaking up garage, psyche, mod and more. Already accomplished and drawing large crowds to their gigs, their debut single ‘The Reincarnation of the Lizard Queen’ was hotly anticipated.

Electric Viper Club
Electric Viper Club are a Manchester-based band with influences from glam rock to 60’s Brit invasion blues. They stunned the audience at Band on the Wall when they supported Twisted Wheel’s Jonny Brown last year. 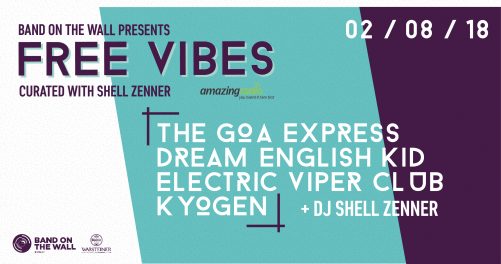