Band on the Wall presents a special edition of Free Vibes, curated with Amazing Radio’s new music champion Shell Zenner. We’ve teamed up with Shell to bring you four of the most exciting artists you need to know. Sign up for free entry and discover new music from the likes of Jekyll, Hannah Ashcroft, Bleach Boy & Monk. DJ Shell Zenner will keep the vibes flowing ‘til late!

Jekyll
Since their 2013 inception, Jekyll, a thrilling and hard-hitting four-piece from the North West of England, have been unrelenting in their dedication to creating and performing music.

Hannah Ashcroft
From festivals to desert roadhouses and the streets of Europe, alt-folk singer/songwriter Hannah Ashcroft has learnt her craft on the road.
Influenced by the likes of John Martyn, Feist and Radiohead she has developed a distinctive sound, combining intricate fingerpicking with haunting melodies to explore themes of humanity, mythology and superstition.
Now based in Manchester, she released her Melbourne made, debut EP ‘The Quiet Kind’ last year, receiving play on BBC Introducing and BBC6 Music and earning praise from Folk Radio UK.

Monk
Monk are a Salford trio busy making a name for themselves with White Hotel shows under their belt already. 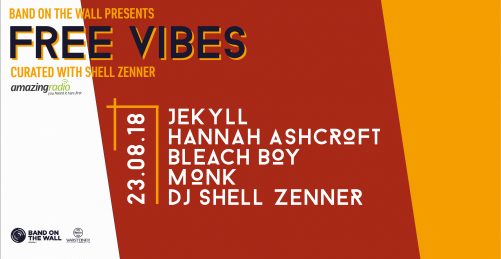